Arsenal take on Dundalk at the Emirates Stadium on Thursday evening. Here is the team Gooner Mac expects Mikel Arteta to select:

Goalkeeper: Bernd Leno has started every game so far this season, including the Europa League win at Rapid Vienna, but I think we may see the German given a rest with Alex Runarsson handed his debut in goal.

Defence: Gabriel has been outstanding so far this season but it would make sense to protect the Brazilian ahead of Sunday’s Premier League trip to Manchester United. Shkodran Mustafi is expected to be recalled but Arsenal have plenty of injury problems at the back.

David Luiz has been ruled out of the Dundalk game with a muscle injury while Rob Holding and Pablo Mari are also unavailable. Calum Chambers is back in full training but this game will come too soon while Sokratis and William Saliba aren’t eligible.

Therefore, we could see Sead Kolasinac playing on the left side of a back three with Cedric Soares operating on the opposite side of Mustafi. Kieran Tierney and Hector Bellerin would be given a rest with United in mind so Ainsley Maitland-Niles and Bukayo Saka could occupy the wing-back roles.

Midfield: Thomas Partey and Granit Xhaka are expected to be rested for Arsenal so Mohamed Elneny is in-line for a recall in midfield. Joe Willock is another option but I think we may see Dani Ceballos keeping his place.

Attack: Pierre-Emerick Aubameyang will obviously be given a breather while Alexandre Lacazette could also be dropped to the bench after a disappointing outing against Leicester City at the weekend.

Eddie Nketiah could lead the line up front for Arsenal while forgotten attacker Reiss Nelson could be handed a rare opportunity. The winger hasn’t featured in the Premier League this season and has started just one cup game but Arteta could give Nelson the chance to shine against Dundalk.

Willian is back in full training after missing the last two games with a calf issue but I think he won’t be risked from the start and will be saved for Man Utd so Nicolas Pepe could start in attack tomorrow. 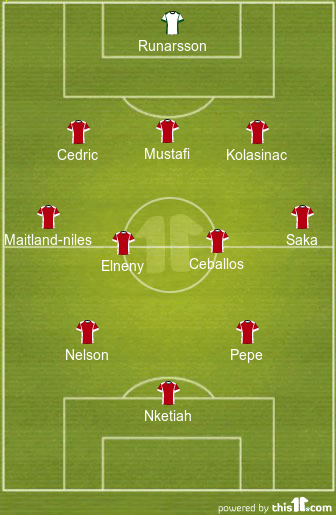