Manchester United take on West Bromwich Albion at Old Trafford on Saturday night. Here is the line-up we think Ole Gunnar Solskjaer will select for the game:

Goalkeeper: David De Gea is expected to keep his place between the sticks this weekend so Dean Henderson will have to settle for a place among the substitutes.

Defence: Man Utd will need to give Victor Lindelof a late fitness test after he picked up a back injury during Sweden’s defeat to France on Tuesday night. Axel Tuanzebe is on stand-by to come in if Solskjaer doesn’t risk Lindelof from the start.

Harry Maguire is expected to be fit despite picking up a knock during the international break while Aaron Wan-Bissaka will once again start at right-back, however, United will be forced into a change on the opposite side of their defence.

That’s because Luke Shaw has been ruled out with a thigh injury that he sustained during the win at Everton two weeks ago so Alex Telles should make his full Premier League debut after being cleared to play following a mix up over his covid test results.

Midfield: Manchester United are likely to stick with Fred and Scott McTominay in midfield so Paul Pogba may have to settle for a place on the bench after making three starts for France during the international break.

Nemanja Matic is also expected to be among the subs while Donny van de Beek is also set to miss out on a starting role as Bruno Fernandes should keep his place in the attacking midfield position against WBA.

Attack: Man Utd will hand Marcus Rashford a late fitness check after he was ruled out of England duty with a shoulder injury. However, the attacker was able to take part in full training on Friday so should be fit to start on the left wing.

Anthony Martial should keep his place up front meaning Edinson Cavani will be among the substitutes but we could see Solskjaer making a change on the right side of the Man Utd attack.

Juan Mata started against Everton last time out but Daniel James could come in tomorrow night. Mason Greenwood has worked on his fitness this week following illness but he’s unlikely to feature against WBA. 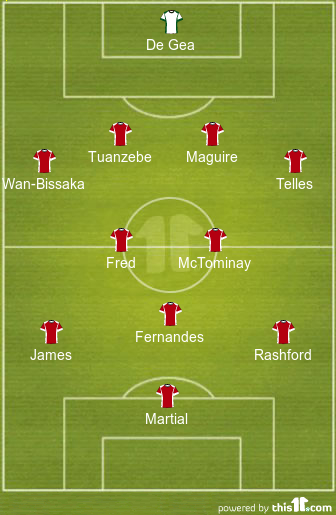