Liverpool will take on Leicester City in a top-of-the-table Premier League clash at Anfield on Sunday evening [Kick-off: 19:15]

Jurgen Klopp, the Reds boss, has said prior to the game that he would welcome an open title race, suggesting as many as eight teams are capable of challenging for the title. Leicester have picked up six wins out of eight games, and have won all of their Europa League group games thus far. Like Liverpool, the Foxes are also missing several key players in defence, and the fixture could turn out to be an interesting goal-fest spectacle.

Here is the team we expect Klopp to select for the game:

Goalkeeper: Alisson will obviously keep his place in goal once again.

Defence: This is where the selection gets really tricky for the Liverpool boss. Joe Gomez picked up a season-threatening knee injury during the international break and has successfully undergone surgery. He is certain to miss a major chunk of the season alongside Virgil van Dijk.

Fabinho has trained with the squad and the 27-year-old could be an option at the back alongside Joel Matip. However, with skipper Jordan Henderson injured, he would be required to anchor the midfield.

Nathaniel Phillips impressed on his debut and he could be in line to start against the Foxes. Rhys Williams is another option for Klopp but the youngster is likely to be used in the Champions League clash against Atalanta next week.

Trent Alexander-Arnold is out with a calf injury that he picked up before the international break. Neco Williams is a natural replacement at right-back, but Klopp may start with versatile James Milner instead.

Andy Robertson picked up a hamstring issue ahead of Scotland’s clash against Slovakia but he allayed the fears by returning to action against Israel. He is set to take his customary position at left-back.

Midfield: Gini Wijnaldum was simply superb for the Dutch national team in midweek and the midfielder is likely to start alongside Fabinho. The likes of Thiago Alcantara and Alex Oxlade-Chamberlain are closing in on full fitness and may be fit for a place on the bench but Naby Keita would be a good option in the three-man midfield.

Forward: Mohamed Salah is out for this game after testing positive for coronavirus while on international duty with Egypt. The Egyptian winger will have to remain quarantined for ten days as per the government protocols once he returns to England, which means that he is set to miss Liverpool’s next two games as well.

Sadio Mane, Roberto Firmino and Diogo Jota should form the front three but Klopp has options in the form of Takumi Minamino and Xherdan Shaqiri from the bench if needed. 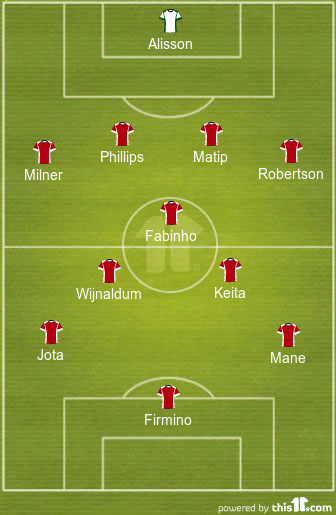