Manchester United take on Southampton at St Mary’s Stadium on Sunday afternoon. Here is the line-up we think Ole Gunnar Solskjaer will select for the game:

Goalkeeper: David De Gea is expected to keep his place between the sticks which means Dean Henderson will have to settle for a place on the bench once again.

Defence: Man Utd will assess the fitness of Victor Lindelof after he was forced off with a niggling back injury during Tuesday night’s win over Basaksehir. Solskjaer is hopefully the Swede will be fit but he might not risk him from the start. Therefore, Axel Tuanzebe could be recalled to line-up alongside Harry Maguire in the middle of defence.

Luke Shaw is back in light training as he looks to overcoming a thigh injury but the Southampton game will come too soon so Alex Telles should continue at left-back. Aaron Wan-Bissaka picked up an ankle knock in midweek but is expected to be passed fit to keep his place at right-back.

Midfield: Manchester United will continue to be without Paul Pogba as the Frenchman is still unable to train due to an ankle injury while Scott McTominay has also been ruled out of the trip to St Mary’s this weekend.

Fred should keep his place in midfield while Donny van de Beek will hope he did enough against Basaksehir to earn another start, however, we wouldn’t be surprised to see Nemanja Matic given a recall against the Saints.

Attack: Bruno Fernandes continued his excellent form with another brace in the Champions League so he’s expected to start once again in the attacking midfield role on Sunday afternoon.

Marcus Rashford is expected to shake-off a knock to start on the left of the United attack while Mason Greenwood could be given a recall after impressing off the bench against Basaksehir last time out.

Edinson Cavani put-in a decent display up front for Man Utd on Tuesday night but the South American may find himself back on the bench on Sunday with Anthony Martial preferred in attack.

Juan Mata and Daniel James are other options for Solskjaer while Jesse Lingard is back in contention after completing his isolation period – although a place on the bench is the best he can hope for. 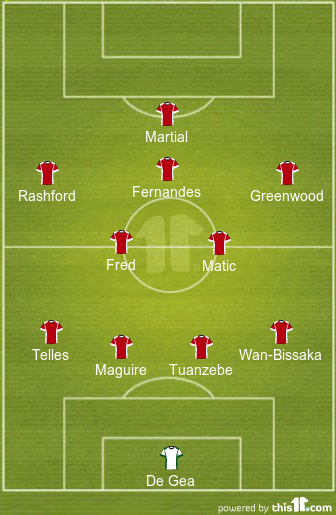