Liverpool take on Ajax in their penultimate Champions League group stage game at Anfield on Tuesday night. Here is the team we expect Jurgen Klopp to select for the game:

Goalkeeper: The Reds need a win to book their place in the knockout stages so Alisson Becker is certain to keep his place between the sticks. Adrian will have to settle for a spot on the bench.

Defence: Liverpool have been handed a boost as Trent Alexander-Arnold has stepped-up his recovery from a calf injury but this game will still come too soon so Neco Williams should continue to deputise at right-back.

Andrew Robertson should keep his place at left-back ahead of Kostas Tsimikas while Fabinho is expected to continue in defence with Virgil van Dijk and Joe Gomez still recovering from long-term knee injuries.

Joel Matip was given a rest for Liverpool’s 1-1 draw with Brighton at the weekend but the Cameroonian international is set for a recall against Ajax with Nat Phillips making way.

Midfield: Liverpool were handed a big boost after Jordan Henderson made his injury return with a substitute appearance at the Amex Stadium on Saturday so the skipper is likely to start tomorrow night.

James Milner will be the man to make way as he’s been ruled out with a hamstring injury that he sustained against Brighton while Curtis Jones could come in for Gini Wijnaldum if Klopp wants to give the Dutchman a breather.

Thiago Alcantara is still unavailable as Klopp confirmed today that the midfielder is still ‘a few weeks’ away from returning from a knee injury while Naby Keita is also a doubt after missing the last two games with a thigh problem.

Forward: Liverpool are expected to recall Sadio Mane to the starting eleven after he was rested at the weekend. Takumi Minamino is the man set to drop out as Mohamed Salah will keep his place.

Diogo Joto also deserves to start once again for the Reds after scoring his 9th goal in 9 games at the weekend and Roberto Firmino could keep his place so Divock Origi will have to settle for a place on the bench. 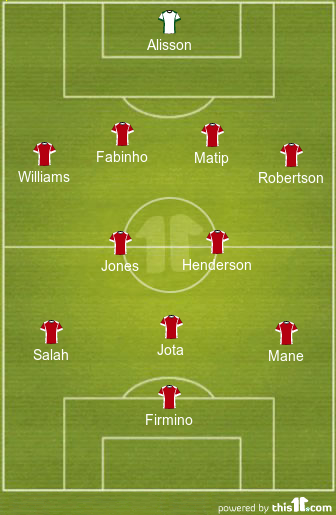