Arsenal take on Tottenham at the New Tottenham Stadium on Sunday afternoon. Here is the team Gooner Mac expects Mikel Arteta to select:

Goalkeeper: Bernd Leno will be recalled after being rested for the Europa League win over Rapid Vienna on Thursday night so Alex Runarsson will drop back to the bench.

Defence: Arsenal will assess David Luiz after he sat out the win over Vienna after suffering a nasty cut to his head during the defeat to Wolves last weekend. The Brazilian might not be risked against Tottenham so Rob Holding could start alongside Gabriel in the middle of the defence with Shkodran Mustafi and Pablo Mari making way.

Kieran Tierney will be recalled at left-back in place of Sead Kolasinac after he was rested on Thursday night while Hector Bellerin is expected to come back in at right-back with Cedric Soares dropping out.

Midfield: Arsenal will make a late call over Thomas Partey as the midfielder is pushing to return against Tottenham on Sunday. Partey has been out since injuring his thigh last month but has been training at London Colney and could be in contention if he proves his fitness ahead of the game. However, I think a place on the bench is the best Partey can hope for as Arteta won’t want to take any risks with him.

Ainsley Maitland-Niles put-in an excellent performance in midfield against Vienna on Thursday so he could be in Arteta’s thoughts for a starting spot at Tottenham. However, I think we’ll see Granit Xhaka and Dani Ceballos starting in midfield on Sunday.

Attack: Arsenal will recall Pierre-Emerick Aubameyang after he was rested last night and Arteta desperately needs his star striker to find his shooting boots against Tottenham as he’s scored just two league goals this season.

Alexandre Lacazette put himself firmly in the frame to start on Sunday after an excellent display in a deeper role against Vienna so he could start behind Aubameyang with Eddie Nketiah making way.

Bukayo Saka should start for the Gunners with Reiss Nelson dropping to the bench while Willian could come in for Nicolas Pepe – who serves the second game of his three-match suspension. 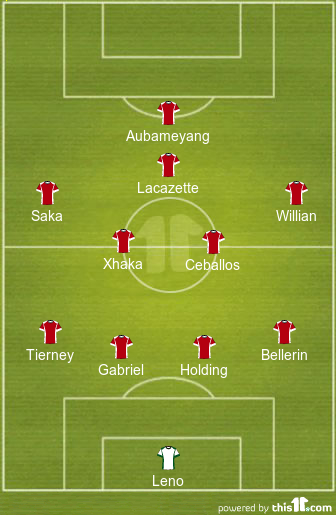