Manchester United take on West Ham at the London Stadium on Saturday evening. Here is the line-up we think Ole Gunnar Solskjaer will select for the game:

Goalkeeper: David De Gea was moving gingerly at times during United’s defeat to Paris Saint-Germain on Wednesday night after picking up a knee issue against Southampton last weekend. However, the Spaniard is still expected to start against West Ham with Dean Henderson on the bench.

Defence: Man Utd have no new injury concerns in defence so Solskjaer is expected to stick with the same back four that started against PSG in the Champions League in midweek.

That means we’ll once again see Aaron Wan-Bissaka at right-back while Alex Telles is expected to start at left-back as Luke Shaw is still lacking match fitness despite stepping-up his recovery in training this week.

Axel Tuanzebe is available again after missing the PSG game due to suspension but Victor Lindelof is likely to keep his place alongside Harry Maguire in the middle of the Manchester United defence tomorrow.

Midfield: United could freshen things up in midfield as Donny van de Beek is pushing for a recall after impressing in recent outings. Scott McTominay is the man most likely to make way if Solskjaer starts the Dutchman.

Paul Pogba is also an option for Man Utd but he’s expected to remain on the bench along with Nemanja Matic as Fred should keep his place in the middle of the park while Bruno Fernandes should once again start in the attacking midfield role.

Attack: Marcus Rashford is a big doubt for Manchester United after aggravating a shoulder injury against PSG. The attacker needed treatment after training on Friday so Solskjaer may not risk him from the start at West Ham.

Therefore, Mason Greenwood could get a recall in place of Rashford while Anthony Martial may start out wide with Edinson Cavani keeping his place through the middle. The Uruguayan international has impressed over the past few games so he may get another chance up top.

Juan Mata and Daniel James are other attacking options for United but they may have to settle for places among the substitutes this weekend. 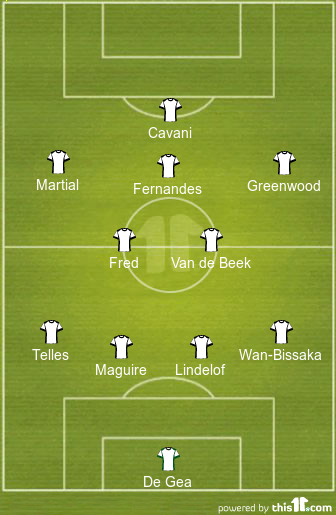