Manchester United take on RB Leipzig in their crucial Champions League clash on Tuesday evening. Here is the line-up we think Ole Gunnar Solskjaer will select for the game:

Goalkeeper: David De Gea missed the win at West Ham after aggravating a knee injury during the defeat to Paris Saint-Germain last week but the Spaniard has travelled to Germany and should return in goal tomorrow. That means Dean Henderson will make way.

Defence: Man Utd have been handed another boost as Luke Shaw is back in the squad after recovering from injury but the defender may not be fit enough to start so Alex Telles could keep his place at left-back.

I think we’ll see Solskjaer go with the same back four that started at the weekend so Victor Lindelof will continue alongside Harry Maguire while Aaron Wan-Bissaka will start at right-back once again. Axel Tuanzebe is available again after missing the PSG game due to suspension but he’s expected to have to settle for a place among the substitutes tomorrow night.

Midfield: United will be without Fred as he’s suspended after being sent off against PSG last week. Scott McTominay should keep his place in the middle of the park while Nemanja Matic could get a recall to protect the defence as Man Utd need just a point to secure qualification to the knockout stages.

Solskjaer may opt to go for a diamond in midfield which could see Paul Pogba keeping his place after a positive display at West Ham. The Frenchman’s agent has been hitting the headlines today after suggesting Pogba could be set to leave Old Trafford but I still think he may start against Leipzig.

Bruno Fernandes is certain to be recalled in the attacking midfield role after being rested against West Ham so Donny van de Beek will make way.

Attack: Manchester United have been dealt a double injury blow with Anthony Martial and Edinson Cavani both ruled out of the trip to Leipzig after picking up knocks at the weekend.

Marcus Rashford will be recalled to start in attack and he could be joined by Mason Greenwood with Odion Ighalo offering support from the bench. Juan Mata and Daniel James are other attacking options for United but they’re likely to be named as subs tomorrow. 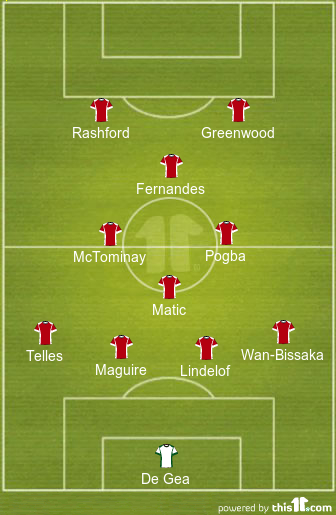