Liverpool are in Denmark to take on Midtjylland knowing they’ve already sealed top spot in their Champions League group. Here is the team we expect Jurgen Klopp to select for the game:

Goalkeeper: The Reds are still without Alisson Becker due to a thigh injury so Caoimhin Kelleher will start between the sticks and he’ll be looking to build on his solid display against Wolves.

Defence: Liverpool were handed a boost at the weekend as Trent Alexander-Arnold made his injury return with an appearance in the second half at Anfield. However, he’s unlikely to be risked from the start tomorrow so Alexander-Arnold may get another run out from the bench. That means Neco Williams could continue at right-back.

Joel Matip and Fabinho are expected to be protected with Joe Gomez and Virgil van Dijk facing lengthy spells on the sidelines so Rhys Williams should get another run out while highly-rated 18-year-old Billy Koumetio could make his Champions League debut in the middle of defence.

Andrew Robertson is almost certain to be given the night off so Kostas Tsimikas will be recalled to start at left-back for Liverpool on Wednesday night.

Midfield: The Merseysiders are set to give Gini Wijanldum a breather while Liverpool skipper Jordan Henderson may also not be risked from the start having only recently returned from injury.

Naby Keita should get a recall after making his comeback off the bench at the weekend while teenage star Leighton Clarkson could get a chance to impress in midfield. Jack Cain is another option for Klopp but he may opt for Curtis Jones as he’s impressed in recent weeks.

Thiago Alcantara is still unavailable due to an on-going knee injury, James Milner also remains out with a hamstring issue while Alex Oxlade-Chamberlain is working his way back to fitness from a long-term knee injury.

Forward: Liverpool are expected to rest their big guns in attack with Mohamed Salah, Sadio Mane and Roberto Firmino all rested for the game as the Reds have already wrapped-up top spot in Group D.

Diogo Jota could get recalled after being named on the bench against Wolves while Takumi Minamino and Divock Origi are also expected to come back into the side. Youngsters Layton Stewart and Liam Millar could be named among the subs. 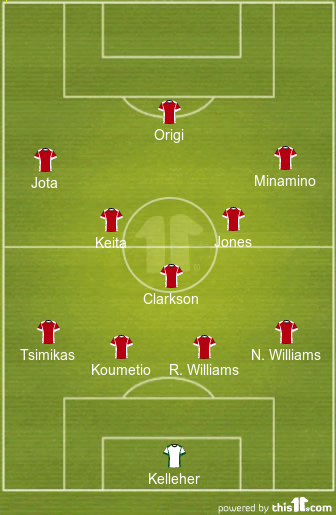