Manchester United take on Leeds United at Old Trafford on Sunday afternoon. Here is the line-up we think Ole Gunnar Solskjaer will select for the game:

Goalkeeper: The United boss made a bold decision to drop David De Gea for the 3-2 comeback victory over Sheffield United on Thursday night but it backfired as Dean Henderson made a huge error to gift the hosts an early lead. It will be interesting to see how Solskjaer’s responds this weekend but De Gea is expected to be recalled.

Defence: Man Utd have no fresh injury concerns in defence so Aaron Wan-Bissaka should continue at right-back while Harry Maguire will once again marshal the back four with Victor Lindelof expected to keep his place alongside the England international.

Alex Telles started at Bramall Lane but we could see Luke Shaw coming back in at left-back if Solskjaer wants to freshen things up. Eric Bailly and Axel Tuanzebe will be options for United from the bench.

Midfield: Fred is pushing for a recall after being dropped against Sheffield United so the South American could come in against Leeds with Nemanja Matic the man most likely to make way.

We could see Solskjaer tweak his formation to add an extra midfielder with Scott McTominay coming back in to the side. Paul Pogba deserves to keep his place after impressing at Bramall Lane so the Frenchman could line-up along with Fred and McTominay in the middle of the park.

Bruno Fernandes is almost certain to keep his place in the advanced midfield role so Donny van de Beek may have to settle for a place among the Manchester United substitutes this weekend.

Attack: Edinson Cavani remains a doubt for United after missing the Sheffield United game due to a calf issue but Anthony Martial could keep his place in attack after scoring the winner on Thursday night.

Marcus Rashford is also expected to start once again after scoring a well taken double so Mason Greenwood will be the man to miss out if Solskjaer does opt to go with four midfielders. Juan Mata and Daniel James will also be named among the subs. 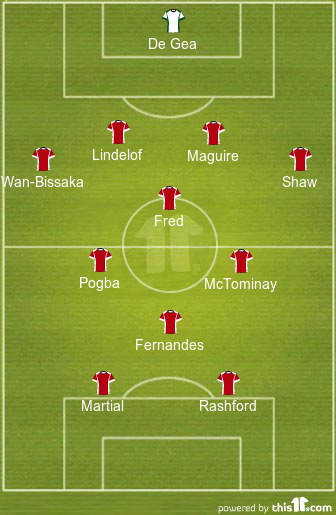