Manchester United take on Burnley at Turf Moor on Tuesday night. Here is the line-up we think Ole Gunnar Solskjaer will select for the game:

Goalkeeper: Dean Henderson has started in United’s last two games but they were both in the domestic cups so No.1 goalkeeper David De Gea is expected to be recalled against Burnley tomorrow night.

Defence: Man Utd have been handed a major boost as Victor Lindelof and Luke Shaw took part in full training today after missing the FA Cup win over Watford on Saturday with minor fitness issues. Lindelof is expected to be recalled along with Harry Maguire to start at Turf Moor so Axel Tuanzebe will make way while Eric Bailly will also drop out after being forced off with a knock at the weekend.

Shaw’s return to fitness should see him come in at left-back with Alex Telles making way despite his positive showing against Watford. Aaron Wan-Bissaka is certain to be recalled at right-back with Brandon Williams dropping out.

Midfield: Manchester United should freshen things up in midfield with Fred pushing for a recall while Nemanja Matic may also be given a start by Solskjaer. Scott McTominay could therefore drop to the bench while Donny van de Beek failed to take his chance to shine in the FA Cup so he’s expected to make way.

Bruno Fernandes is certain to be recalled in the advanced attacking midfield role after he was rested on Saturday so Jesse Lingard will drop out after a rare start against Watford in the FA Cup third round win.

Attack: Edinson Cavani is back in contention after serving his three-match ban but he may have to make-do with a place among the Man Utd substitutes as Anthony Martial should be recalled to start up front.

Mason Greenwood will make way while Marcus Rashford is also expected to be recalled in place of Juan Mata. Paul Pogba will face a late fitness test on a knock but he could replace Daniel James on the wing if the Frenchman is passed fit to start. 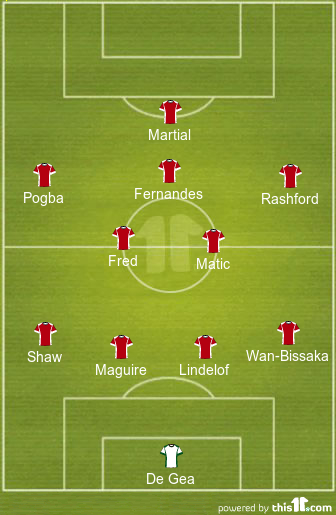