Manchester United take on Fulham at Craven Cottage on Wednesday night. Here is the line-up we think Ole Gunnar Solskjaer will select for the game:

Goalkeeper: David De Gea is expected to keep his place between the sticks tomorrow night so Dean Henderson will have to settle for a place on the bench once again.

Defence: Despite keeping a clean sheet at Anfield on Sunday, Man Utd could make a couple of changes in defence with Alex Telles pushing for a recall at left-back. Luke Shaw has performed well in recent weeks but could be given a rest tomorrow.

Eric Bailly will also hope to feature at Fulham so Victor Lindelof could be given a rest to help protect his troublesome back issue. Harry Maguire should keep his place at the heart of the Manchester United defence while Aaron Wan-Bissaka will once again start at right-back.

Midfield: Manchester United are expected to rotate in midfield with Fred and Scott McTominay in-line for a breather after their exploits during the 0-0 draw with Liverpool at the weekend. Nemanja Matic could be recalled in the middle of the park with Paul Pogba dropping back into a more central role alongside the Serbian.

Bruno Fernandes didn’t have his best game against Liverpool but he’s likely to keep his place in the advanced attacking midfield role so Donny van de Beek will have to settle for a place among the substitutes once again.

Attack: Anthony Martial drew a blank at Anfield so we could see Edinson Cavani recalled to lead the line up front for United tomorrow night. Marcus Rashford should keep his place in the Man Utd attack and he may start from the left wing.

Mason Greenwood is pushing for a recall and the 19-year-old may be deployed from the wing with the likes of Daniel James and Juan Mata other options for Solskjaer from the substitutes bench. 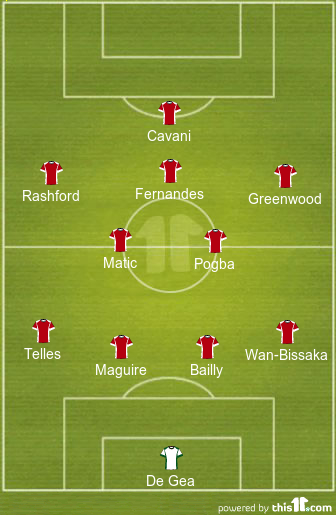