Liverpool take on Tottenham in north London this evening. Here is the team we expect Jurgen Klopp to select for the game:

Goalkeeper: Alisson Becker is certain to keep his place between the sticks tonight so Caoimhin Kelleher will once again act as the Brazilian’s back-up on the bench.

Defence: Joel Matip was rested for Liverpool’s FA Cup defeat to Manchester United last weekend but the Cameroon international should return to the starting eleven this evening. Fabinho will keep his place in the middle of defence with Rhys Williams the man to make way.

I don’t think we’ll see Klopp making any changes to his full-backs so Trent Alexander-Arnold should continue at right-back against Tottenham tonight while Andy Robertson will once again start on the left. Joe Gomez and Virgil van Dijk are still recovering from serious knee injuries.

Midfield: Liverpool have been handed a major boost as Jordan Henderson is expected to return to action this evening after training this week following a muscle injury. The Reds skipper should start in midfield alongside Thiago Alcantara.

Gini Wijnaldum is also expected to keep his place in the Liverpool midfield so James Milner is likely to drop to the bench against Tottenham while Xherdan Shaqiri and Alex Oxlade-Chamberlain will also have to settle for substitute roles.

Forward: Mohamed Salah returned to goal-scoring form with a brace against Manchester United at the weekend and the Egyptian international is expected to start once again this evening.

Roberto Firminio’s form has been called into question in recent weeks but we expect the South American to keep his place in the Liverpool attack tonight so Divock Origi will have to settle for a place on the bench.

Sadio Mane was named on the bench at the weekend so he should be recalled to line-up alongside Salah and Firmino meaning Curtis Jones will drop out against Tottenham. Takumi Minamino will be another option from the bench if Liverpool need to change things up but Diogo Jota remains on the sidelines. 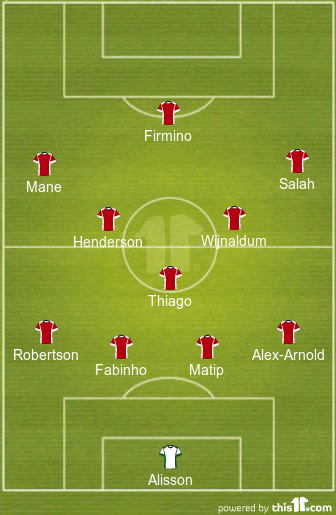