Manchester United take on West Brom at the Hawthorns on Sunday afternoon. Here is the line-up we think Ole Gunnar Solskjaer will select for the game:

Goalkeeper: Dean Henderson will be hoping to retain his place after keeping a clean sheet against West Ham in the FA Cup on Tuesday night. David De Gea was criticised for his performance against Everton last weekend but the Spaniard is still being tipped to start tomorrow.

Defence: Man Utd will welcome Eric Bailly back into the squad after he recovered from a knock but the Ivorian may have to settle for a place on the bench with Victor Lindelof keeping his place alongside Harry Maguire in the middle of the back four.

Aaron Wan-Bissaka should continue at right-back but Solskjaer is expected to make a change at left-back with Luke Shaw recalled. Alex Telles failed to take his chance during Man Utd’s narrow win over West Ham in midweek so he’ll drop out.

Midfield: Manchester United were dealt a major blow last week after Paul Pogba picked up a thigh injury against Everton and the Frenchman has been ruled out of the trip to West Brom tomorrow afternoon.

Scott McTominay is expected to be recalled after coming off the bench to score the winner against the Hammers last time out. Nemanjam Matic will be the man to make way with Fred keeping his place in the middle of the park.

Bruno Fernandes was given a bit of a rest in midweek as he started from the bench against West Ham but the Portuguese superstar is certain to be recalled tomorrow with Donny van de Beek having to make-do with a place among the substitutes.

Attack: Marcus Rashford should keep his place in the Man Utd attack at the Hawthorns while Mason Greenwood may also start once again having impressed in recent weeks so the likes of Daniel James and Amad Diallo may be named on the bench.

Solskjaer is expected to make a change up front with Edinson Cavani recalled to lead the line. That means Anthony Martial may be the man to make way but he’ll be a useful player to have from the bench if needed. 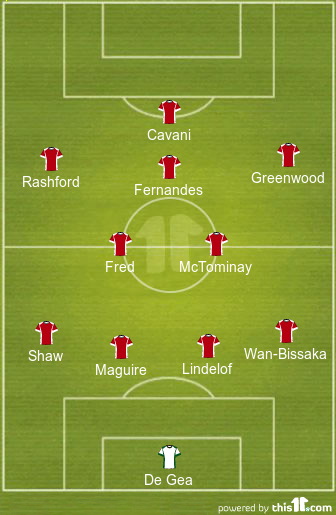