Liverpool take on RB Leipzig in the first leg of their Champions League tie on Tuesday night. Here is the team we expect Jurgen Klopp to select for the game:

Goalkeeper: Alisson Becker came under criticism for his part in Liverpool’s 3-1 defeat at Leicester City at the weekend but the Brazilian is still certain to keep his place between the sticks. Adrian is in-line to remain on the bench if Caoimhin Kelleher isn’t fit.

Defence: Liverpool continue to have huge injury problems in defence as Fabinho joined the long list of absentees after picking up a muscle injury last week. He therefore misses the Leipzig game along with Virgil van Dijk, Joe Gomez and Joel Matip.

Jordan Henderson is expected to start in defence once again while January signing Ozan Kabak could keep his place despite his error playing a part in Leicester’s crucial second goal at the weekend. Ben Davies may return to the bench if passed fit.

I don’t think we’ll see any changes to the back four that started at the King Power last time out so Andy Robertson and Trent Alexander-Arnold should continue in the full-back positions for Liverpool with Kostas Tsimikas having to settle for a place on the bench.

Midfield: With Henderson in defence and Fabinho out injured Liverpool will be without two of their starting midfielders for this Champions League tie but they still have plenty options in the middle of the park.

Thiago Alcantara was given a breather against Leicester so the 29-year-old is expected to be recalled to start along with Gini Wijnaldum tomorrow night. James Milner could be the man to make way with Curtis Jones keeping his place.

Naby Keita returned to training today after finally recovering from a muscle issue but he won’t make the trip to Bucharest. Alex Oxlade-Chamberlain will be an option for Liverpool from the bench though.

Forward: The Reds failed to make the most of their early dominance against Leicester at the weekend after letting slip a 1-0 lead but I still expect Klopp to stick with his preferred front three against Leipzig. That means Roberto Firmino is likely to keep his place in attack with Sadio Mane and Mohamed Salah offering support.

Xherdan Shaqiri will be among the substitutes while Divock Origi may return after recovering from a minor knock. However, Diogo Jota is still unavailable due to a knee injury. 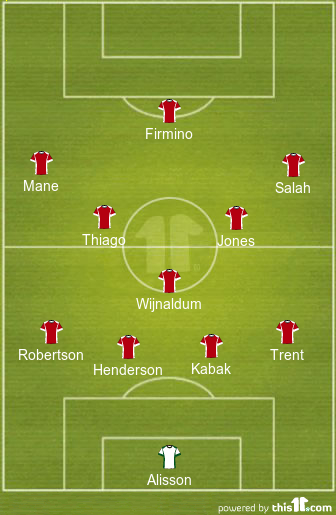