Liverpool take on Everton in the Merseyside Derby at Anfield this weekend. Here is the team we expect Jurgen Klopp to select for the game:

Goalkeeper: Alisson Becker has been criticised for some below-par performances lately but Klopp is understandably sticking-by his number one so the Brazilian will keep his place once again this weekend.

Defence: Liverpool still have plenty of injury problems in defence as Virgil van Dijk, Joe Gomez and Joel Matip all remain on the sidelines with long-term injuries. Fabinho is also still unavailable due to a muscle injury so Klopp doesn’t have too many senior options.

Jordan Henderson is expected to fill-in at the back once again tomorrow while he could be partnered by Ozan Kabak as he impressed during the 2-0 Champions League win over RB Leipzig in midweek.

Ben Davies and Nat Phillips will be centre-back options from the bench while Kostas Tsimikas will also have to settle for a substitutes role as Liverpool are expected to go with their first choice full-backs Trent Alexander-Arnold and Andy Robertson against Everton.

Midfield: With Fabinho injured and Henderson in defence, Liverpool will be without two of their key central midfielders but Naby Keita could return to the squad tomorrow. The 26-year-old is back in training after an ankle injury but having missed the last two months, a place on the bench is the best Keita can realistically hope for this weekend.

James Milner remains out with a thigh injury, therefore, I expect Liverpool to stick with the same midfield three that started against Leipzig with Gini Wijnaldum joined by Thiago Alcantara and Curtis Jones.

Forward: Klopp would ideally like to rest a few players after their away Champions League trip in midweek but Liverpool desperately need to get back to winning ways tomorrow so I expect the German coach to go with his best front three.

That would see Sadio Mane and Mohamed Salah once again supporting Roberto Firmino in attack against Everton with the likes of Alex Oxlade-Chamberlain, Xherdan Shaqiri and Divock Origi among the subs. Diogo Jota remains out with a knee injury. 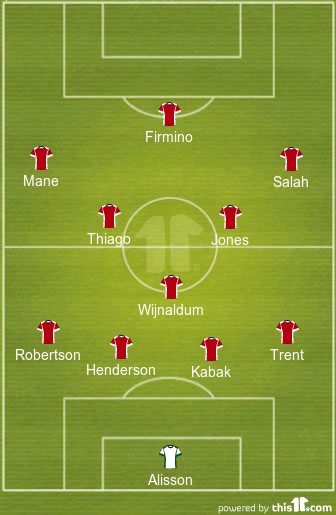