Manchester United take on Real Sociedad in the second leg of their Europa League tie on Thursday night. Here is the line-up we think Ole Gunnar Solskjaer will select for the game:

Goalkeeper: Dean Henderson started in the first leg and he’s expected to be given another chance to impress between the sticks with David De Gea dropping out.

Defence: Man Utd hold a formidable 4-0 lead heading into the second leg so Solskjaer is expected to make plenty of changes ahead of Sunday’s huge Premier League clash with Chelsea. The likes of Harry Maguire and Victor Lindelof should be rested with Eric Bailly and Axel Tuanzebe in-line for recalls in the middle of defence.

Alex Telles is also expected to be recalled to replace Luke Shaw at left-back while Aaron Wan-Bissaka should get a rare night off with Brandon Williams coming-in at right-back tomorrow.

Midfield: Manchester United will continue to be without Paul Pogba as the Frenchman is still recovering from a thigh injury that’s kept him out in recent weeks while Scott McTominay has been ruled out after failing to recover from a knock.

Donny van de Beek is also still unavailable due to a muscle injury, therefore, Solskjaer has limited options to rotate in midfield meaning Fred and Nemanja Matic are likely to keep their places tomorrow night.

Attack: Bruno Fernandes should be given a well-earned rest so Juan Mata could be recalled to start for Man Utd in the attacking midfield role while Daniel James may get another opportunity to impress in attack.

Marcus Rashford and Anthony Martial could be rested with the Chelsea game in mind while Edinson Cavani has been ruled out with a muscle issue so Mason Greenwood should lead the line up front.

Solskjaer has confirmed Manchester United wonderkid Amad Diallo will feature tomorrow so the 18-year-old could be handed his full first team debut after impressing with the U23s. 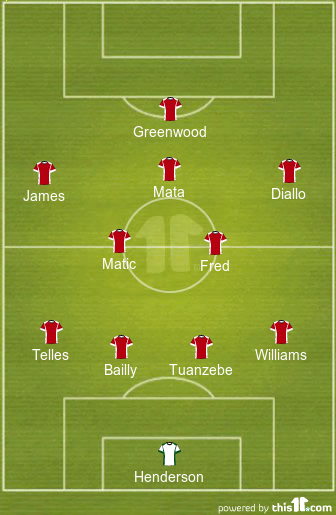