Goalkeeper: Alisson Becker is expected to continue between the sticks for Liverpool this evening so Adrian will remain on the bench with Caoimhin Kelleher still a doubt with an abdominal injury.

Defence: Nat Phillips produced a superb performance during Liverpool’s Champions League win over RB Leipzig in midweek so he deserves to keep his place. With the likes of Virgil van Dijk, Joel Matip and Joe Gomez still injured Ozan Kabak is likely to start alongside Phillips with Rhys Williams on the bench.

I don’t think we’ll see any changes in the full-back positions as this is Liverpool’s last game until after the international break so Trent Alexander-Arnold and Andy Robertson should once again start tonight.

Midfield: Liverpool looked so much better in midfield with Fabinho back in his preferred position in front of the back four so I expect to see the Brazilian deployed in that role once again this evening.

Thiago Alcantara also looked much more comfortable with Fabinho playing behind him so the Spanish international should start along with Gini Wijnaldum in the middle of the park against Wolves.

Liverpool will have options on the bench with the likes of Naby Keita, Alex Oxlade-Chamberlain, James Milner and Curtis Jones all available for selection.

Forward: Roberto Firmino remains a doubt for the trip to Wolves due to a knee injury that kept him out of the Leipzig game in midweek and I don’t expect Klopp to rush the 29-year-old back to action.

Diogo Jota should therefore keep his place in the Liverpool attack where he’ll be joined by Mohamed Salah and Sadio Mane. Xherdan Shaqiri and Divock Origi will have to make-do with places on the bench. 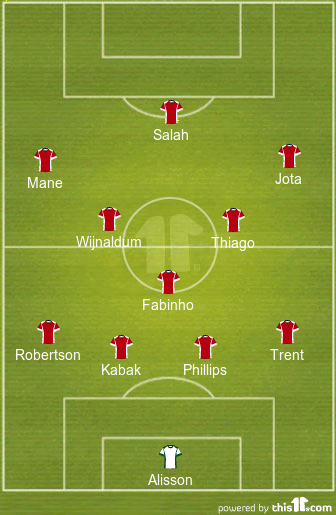