Arsenal take on Slavia Prague in the Europa League quarter-finals this evening. Here is our preview with team news, line-ups and prediction

Arsenal take on Slavia Prague at the Emirates Stadium in the quarter-finals of the Europa League this evening.

The Gunners will be looking to bounce back following their disappointing 3-0 defeat to Liverpool at the weekend. The humbling loss has left them sitting 10th in the Premier League table and seven points off sixth position.

That means they face an uphill struggle to qualify for Europe via the league so Mikel Arteta is expected to make winning the Europa League his top priority as that would secure Champions League football next season.

Arsenal booked their place in the quarter finals with a 3-2 aggregate victory over Olympiacos in the last-16 but they’ll have to improve their performance on home soil having lost the second leg 1-0 at the Emirates.

Arteta should be confident of seeing-off Slavia Prague over two legs but the Czech outfit shouldn’t be underestimated having beaten Celtic, Leicester City and Rangers en route to the quarter finals.

Arsenal have been dealt a major blow after confirming Kieran Tierney has been ruled out for at least four weeks with a knee injury so Arteta has a big decision to make over who’ll come in at left-back.

Bukayo Saka is available again after overcoming a hamstring injury while Emile Smith Rowe is set to return after missing the defeat to Liverpool with a knee issue. Martin Odegaard is also likely to pass a late fitness test on an ankle problem.

Granit Xhaka will be back in contention after recovering from illness and Hector Bellerin is expected to be recalled at right-back, however, David Luiz is still out after undergoing a minor knee operation.

As for Slavia Prague, they’ll be without Ondrej Kudela after he was hit with an initial one-match suspension as a result of allegations of racism following an incident with Glen Kamara in the previous round.

Defenders Simon Deli and David Hovorka are out through injury while winger Abdallah Sima is another absentee for the visitors. 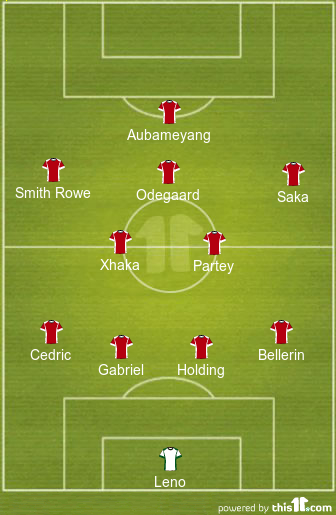 Arsenal 3-1 Slavia Prague: Arsenal’s inconsistent form has plagued them all season and they’ll have to be on top form to see-off a dangerous Slavia Prague side this evening.

However, the Gunners know success in the Europa League is vital to salvage something from a poor campaign and this is a great opportunity to reach the semi-finals.

I expect a well-contested game but Arsenal should have enough quality to get the job done at the Emirates. A 3-1 victory will put them in pole position heading into the second leg.