Liverpool take on Aston Villa at Anfield on Saturday afternoon. Here is the team we expect Jurgen Klopp to select for the game:

Liverpool take on Aston Villa at Anfield on Saturday afternoon. Here is the team we expect Jurgen Klopp to select for the game:

Goalkeeper: Alisson Becker will keep his place in goal for Liverpool so Adrian is set to remain on the bench with Caoimhin Kelleher still out injured.

Defence: Klopp may look to rest one of his full-backs ahead of the crucial Champions League second leg against Real Madrid. Andy Robertson has looked jaded in recent weeks so he may be the man to make way with James Milner coming in at left-back.

Trent Alexander-Arnold was at fault for one of the Madrid goals but he should keep his place at right-back while Nat Phillips and Ozan Kabak are likely to continue in the middle of defence with Virgil van Dijk, Joel Matip and Joe Gomez out injured.

Midfield: Liverpool will still be without Jordan Henderson for the visit of Villa this weekend as he’s still recovering from a groin injury. Fabinho is expected to start once again in the holding role.

Naby Keita failed to take his opportunity against Madrid in midweek so he’s likely to drop back to the bench this weekend. Thiago Alcantara is in-line for a recall after his surprise omission in the Champions League tie.

Klopp may opt to rest Gini Wijnaldum so Curtis Jones could be recalled to start against Aston Villa. Alex Oxlade-Chamberlain is another option but he’s out-of-favour so is likely to remain on the bench.

Forward: Liverpool need to score at least two goals on Wednesday night to stand a chance of getting past Madrid so Klopp could be tempted to freshen things up in attack on Saturday.

Sadio Mane hasn’t looked himself lately and could perhaps do with a breather so he may be rested. Roberto Firmino is expected to be recalled after being on the bench last time out so he could come in for Mane.

That would see Diogo Jota moving out wide while Mohamed Salah is likely to keep his place. Xherdan Shaqiri is an option for Klopp but he’s expected to remain among the substitutes this weekend. 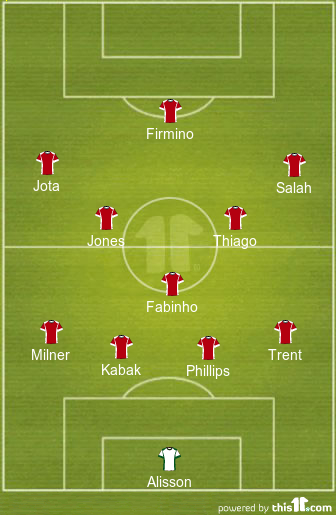