Liverpool take on Real Madrid in the second leg of their Champions League tie on Wednesday night. Here is the team we expect Jurgen Klopp to select

Liverpool take on Real Madrid in the second leg of their Champions League tie on Wednesday night. Here is the team we expect Jurgen Klopp to select for the game:

Goalkeeper: Alisson Becker will keep his place between the sticks for Liverpool and he’ll be looking to keep a clean sheet to give the Merseysiders a better chance of turning things around.

Defence: Klopp doesn’t have too many options to mix things up in defence as Virgil van Dijk, Joel Matip and Joe Gomez all remain on the sidelines. Therefore, we expect Nat Phillips to continue alongside Ozan Kabak in the middle of the back four.

Liverpool have become heavily reliant on Andrew Robertson and Trent Alexander-Arnold in the full-back areas and they are expected to once again start against Real Madrid tomorrow night.

Midfield: The Reds are still without skipper Jordan Henderson due to an on-going groin injury but Thiago Alcantara is expected to be recalled after not starting in the last two matches.

Fabinho will no doubt keep his place in the holding role for Liverpool while Gini Wijnaldum should retain his position in midfield. That means James Milner will be the man to make way while Naby Keita and Alex Oxlade-Chamberlain will also have to settle for places on the bench.

Curtis Jones missed the 2-1 victory over Aston Villa at the weekend due to a knock so he’ll need to be assessed before his availability to face Madrid is determined.

Forward: Liverpool need to score at least two goals on Wednesday night to stand a chance of getting past Madrid so they’ll need to be on top form in the final third.

Sadio Mane is expected to be recalled after being rested at the weekend and Klopp will be hoping for a big performance from him as the Senegalese international hasn’t been firing on all cylinders lately.

Mohamed Salah should keep his place while Diogo Jota could get the nod ahead of Roberto Firmino so the Brazilian forward may have to settle for a place on the bench along with Xherdan Shaqiri. 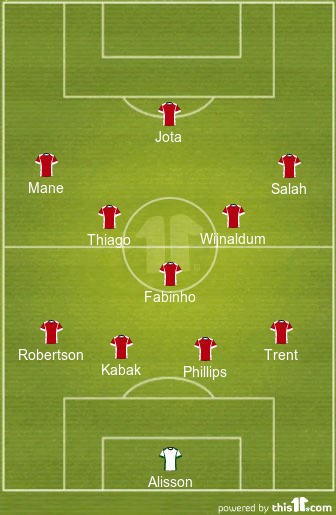