Arsenal take on Slavia Prague in the Europa League quarter-finals tonight. Here is our preview with team news, line-ups and prediction

Arsenal take on Slavia Prague in the second leg of our Europa League quarter-final tie this evening.

The Gunners wasted a golden opportunity to put one foot in the semi-finals after blowing the first leg at the Emirates Stadium last week. Arsenal had a number of terrific chances to put the game to bed and just as it looked as though we’d secured a vital lead when Nicolas Pepe broke the deadlock, Prague snatched a 1-1 draw deep into stoppage time.

It was a cruel goal for Arsenal to concede but that lack of concentration from a 93rd minute corner has left the tie hanging in the balance and Mikel Arteta’s side must now get a positive result in the Czech Republic this evening.

We warmed up for the game with an impressive 3-0 victory over Sheffield United at Bramall Lane on Sunday night so Arteta will be hoping for a repeat performance on the road tonight to help Arsenal book their place in the last-4.

Arsenal could be without skipper Pierre-Emerick Aubameyang as the striker wasn’t spotted at training on Wednesday. Aubameyang missed the win at Sheffield United due to illness and remains a doubt for tonight’s match.

Martin Odegaard is also set to miss out once again after not training at London Colney yesterday having missed the last two games with an ankle injury that he initially picked up during the international break.

However, Arsenal have been boosted by the news that Bukayo Saka is fit despite picking up a knock at the weekend while Emile Smith Rowe is also ready to return after recovering from a minor ankle injury.

Kieran Tierney and David Luiz remain on the sidelines but Cedric Soares and Gabriel are pushing for recalls. Thomas Partey will start in midfield and Arteta will be looking for a big performance from his summer signing.

Slavia Prague will be without defender Ondrej Kundela after he was slapped with a 10-match ban by UEFA for racially abusing Rangers star Glen Kamara. David Hovorka and Simon Deli are also unavailable due to injury. 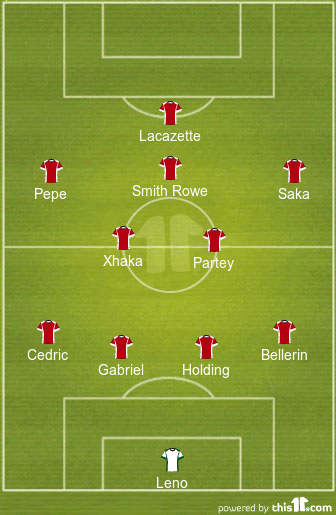 Slavia Prague 1-2 Arsenal: There is no doubt the Gunners were by far the better team in the first leg and will be kicking themselves for not holding on to their lead.

Prague have proven themselves to be a tough side having already beaten the likes of Celtic, Rangers and Leicester City en route to the quarter-finals so Arsenal should expect a difficult match tonight.

However, Arsenal have a lot more quality and that should be enough for us to get a result. As long as we cut out the silly mistakes at the back, we should have enough firepower to secure a win and progress to the semi-finals.