Arsenal take on Everton at the Emirates Stadium this evening. Here is our preview with team news, line-ups and prediction for the game

Arsenal will be desperate to get back to winning ways when they take on Everton at the Emirates Stadium this evening.

The Gunners blew a golden opportunity to close the gap on the top seven after drawing 1-1 at home to Fulham last weekend with Eddie Nketiah scoring a stoppage time equaliser to salvage a point.

That result has left Arsenal sitting ninth in the Premier League table – seven points adrift of seventh-placed Liverpool with just six games remaining – so they face an uphill battle to qualify for Europe via the league.

Mikel Arteta would therefore be forgiven for prioritising next weeks Europa League semi-final but the Gunners boss insists his focus is firmly set on getting three points against Everton this evening.

The Toffees head to north London sitting one place and three points above Arsenal in the table so they can move to within just one point of rivals Liverpool with a win at the Emirates Stadium tonight.

Arsenal have major problems up front as Alexandre Lacazette has joined Pierre-Emerick Aubameyang on the sidelines. The Frenchman picked up a hamstring injury against Fulham and won’t be involved this evening.

Aubameyang is also missing as he continues to recover from malaria. The Gabon international is hoping to resume training next week but may take some time to build-up his match fitness.

Martin Odegaard is back in training after recovering from an ankle injury but he’s unlikely to be risked from the start with the Villarreal game on the horizon. Kieran Tierney and David Luiz remain out with knee injuries.

As for Everton, they’ve been handed a big boost with the news with Dominic Calvert-Lewin is fit to return tonight. Yerry Mina and Andre Gomes are also back in contention while Fabian Delph and Bernard are also fit.

However, Abdoulaye Doucoure remains out with an ankle injury while Jean-Philippe Gbamin is still recovering from a knee problem. 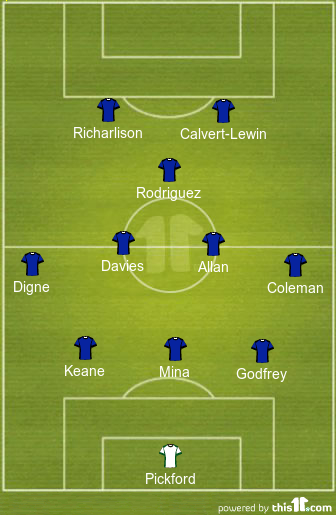 Arsenal 1-1 Everton: Arsenal have an excellent record in this fixture as they’re unbeaten in their last 24 Premier League home games against Everton so they’ll be looking to maintain that run.

However, the Gunners are without their two main strikers and will no doubt have one eye on the Europa League semi-finals with as they have little left to play for in the Premier League. Therefore, we’re backing Everton to get a point tonight.