Arsenal take on Villarreal in the second leg of their Europa League semi-final tie. Here is the team Gooner Mac thinks Mikel Arteta will select:

Arsenal take on Villarreal in the second leg of their Europa League semi-final tie at the Emirates this evening. Here is the team Gooner Mac thinks Mikel Arteta will select:

Goalkeeper: Mat Ryan kept a clean sheet during Arsenal’s 2-0 win at Newcastle United on Sunday but Bernd Leno is expected to be recalled this evening after being rested at the weekend.

Defence: Arteta has some big decisions to make in defence. Arsenal kept a rare clean sheet on Sunday but it’s possible we’ll still see an entirely different back four starting against Villarreal tonight.

Kieran Tierney is pushing to feature after recovering from a knee injury that’s kept him out for a month. The Scotsman has taken part in full training in recent days and Arteta is expected to take a risk by starting Tierney for this crucial game.

Calum Chambers could also come in at right-back for Hector Bellerin but it will be interesting to see who starts in the middle of the Arsenal defence. David Luiz could be a shock inclusion as he trained yesterday despite limping off on Sunday with a hamstring issue while Gabriel did well against Newcastle.

However, Arteta has favoured the pairing of Rob Holding and Pablo Mari in recent weeks so they are likely to be given the nod tonight with Luiz and Gabriel on the bench.

Midfield: If Tierney returns at left-back that will allow Granit Xhaka to move back into midfield. That would be a big boost for Arsenal as Dani Ceballos is suspended this evening.

Mohamed Elneny impressed at the weekend after a rare start in the league but Thomas Partey is still expected to be recalled to start against Villarreal.  Martin Odegaard is back to full fitness and he should continue in the No.10 role.

Attack: Arsenal played without a recognised striker in the first leg but that will change this evening with Pierre-Emerick Aubameyang back to fitness. The Gabon hitman got on the scoresheet against Newcastle and will be hoping to fire Arsenal to the final tonight.  Alexandre Lacazette could return to the squad after recovering from a hamstring injury but he may have to make do with a place on the bench.

Bukayo Saka was rested at the weekend so he’ll return on the right wing with Willian dropping out but Arteta has options on the left. Gabriel Martinelli was excellent against Newcastle while Nicolas Pepe will be hoping to feature but Emile Smith Rowe could be the man selected tonight. 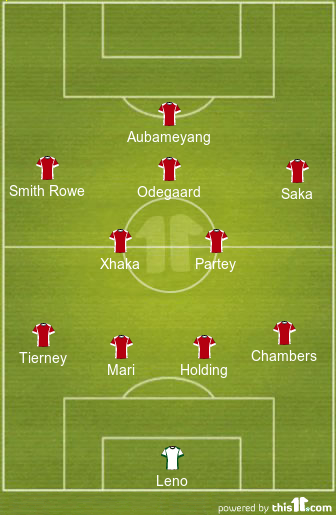