Manchester United take on Leicester City at Old Trafford on Tuesday night. Here is the line-up we think Ole Gunnar Solskjaer will select for the game:

Manchester United take on Leicester City at Old Trafford on Tuesday night. Here is the line-up we think Ole Gunnar Solskjaer will select for the game:

Goalkeeper: Dean Henderson should keep his place in goal tomorrow night with David De Gea among the substitutes.

Defence: With Man Utd set to play their second game of three inside just five days, Solskjaer is going to have to rotate his squad in order to protect his players and keep them fresh.

However, United have been dealt a big blow as Harry Maguire is expected to miss the Leicester game after being forced off with a foot injury during the 3-1 comeback victory over Aston Villa on Sunday.

Victor Lindelof is expected to be rested for the Liverpool game on Thursday night so Eric Bailly and Axel Tuanzebe could be recalled to start in the middle of defence tomorrow. Luke Shaw could also be rested with Alex Telles coming in at left-back but Aaron Wan-Bissaka may keep his place at right-back.

Midfield: Manchester United are expected to make at least one change in midfield with Nemanja Matic pushing for a recall. Fred could be the man to be rested with Scott McTominay keeping his place as he got a breather against Roma last week.

It must surely be time for Solskjaer to give Bruno Fernandes a rest as he’ll be saved for the Liverpool game. This could open the door for Donny van de Beek to make a rare start in the Premier League.

Attack: Edinson Cavani came off the bench to score at Villa on Sunday so he’s likely to be recalled up front. That would allow Solskjaer to rest Marcus Rashford ahead of the Liverpool match on Thursday.

Paul Pogba could also drop to the bench tomorrow night with Juan Mata given a start out wide but Mason Greenwood may keep his place with Daniel James and Anthony Martial set to miss out through injury once again. 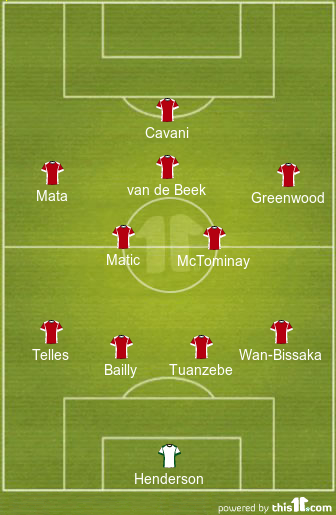