Liverpool will continue their push for the top four when they take on West Brom at the Hawthorns on Sunday. Here is the team we expect Klopp to select

Liverpool will continue their push for the top four when they take on West Brom at the Hawthorns this afternoon. Here is the team we expect Jurgen Klopp to select for the game:

Goalkeeper: There won’t be any change in goal Alisson Becker is certain to keep his place once again so Adrian and Caoimhin Kelleher will battle for a spot on the bench.

Defence: Virgil van Dijk, Joel Matip and Joe Gomez have all been stepping-up their rehabilitation from serious injuries in recent weeks but none of the trio will play again this season so remain on the sidelines.

Ozan Kabak remains a serious doubt after missing the last two games with a muscle issue so youngster Rhys Williams is in-line to continue alongside Nat Phillips in the middle of defence this afternoon.

Trent Alexander-Arnold is returning to his best form and he’ll continue in the right-back role for Liverpool against West Brom while Andy Robertson will once again start on the left side of defence.

Midfield: Liverpool skipper Jordan Henderson won’t play again this season due to a groin injury so he won’t be available this afternoon. Fabinho has been back in his favoured midfield position lately and has made a big difference so he’ll continue in the holding role at the Hawthorns.

Thiago Alcantara should keep his place in midfield while Gini Wijnaldum is also likely to get the nod once again meaning Curtis Jones will have to settle for a place on the bench.

James Milner is a doubt with a knock that’s hampered in recently while Naby Keita is also facing a late fitness test on a muscle injury.

Forward: Sadio Mane hit the headlines after snubbing a handshake from Jurgen Klopp following Liverpool’s win at Manchester United. Klopp has played down the incident so we could see the 29-year-old recalled today.

Roberto Firmino deserves to keep his place after scoring twice at Old Trafford last time out while Mohamed Salah should also start for the Reds once again. Therefore, Diogo Jota may be the man to make way if Mane is recalled. 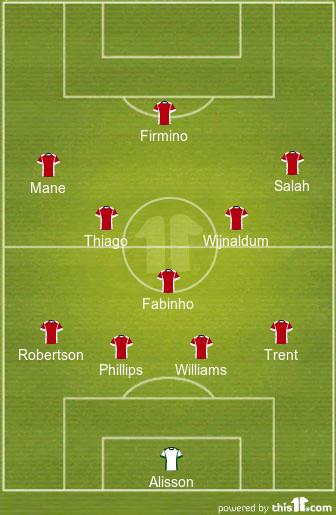