Man Utd will look to secure second spot with a win over Fulham at Old Trafford. Here is the line-up we think Ole Gunnar Solskjaer will select

Manchester United will look to secure second position in the table with a win over Fulham at Old Trafford on Tuesday evening. Here is the line-up we think Ole Gunnar Solskjaer will select for the game:

Goalkeeper: Dean Henderson should keep his place in goal for United’s final home Premier League game of the season so David De Gea will remain on the bench.

Defence: Man Utd will continue to be without the services of Harry Maguire as he’s still recovering from an ankle injury but Solskjaer could still freshen things up in defence tomorrow evening.

Axel Tuanzebe is pushing for a recall so he could replace Eric Bailly alongside Victor Lindelof. Alex Telles may be hoping to feature during Man Utd’s last two league games but Luke Shaw is likely to keep his place tomorrow while Aaron Wan-Bissaka will once again line-up at right-back.

Midfield: Manchester United are being tipped to field a strong side against Fulham tomorrow so Solskjaer can then rest some players on Sunday ahead of the Europa League final.

Scott McTominay is likely to keep his place in midfield but we might see Paul Pogba playing in a deeper midfield role against Fulham with Fred the man to make way.

Nemanja Matic and Donny van de Beek will have to settle for places on the Man Utd bench but Bruno Fernandes is expected to keep his place to start in the attacking midfield role once again.

Attack: Anthony Martial is set to return to the squad after recovering from a knee injury while Dan James is also available again, however, Solskjaer says the duo aren’t fit enough to start just yet so a place on the bench is likely tomorrow.

Mason Greenwood is pushing for a starting place after being named on the bench for the defeat to Liverpool last time out and the 19-year-old could be recalled on the wing if Pogba is deployed in central midfield.

Marcus Rashford should start once again while Edinson Cavani is likely to lead the line up front for United before being rested against Wolves on the final day of the league season this weekend. 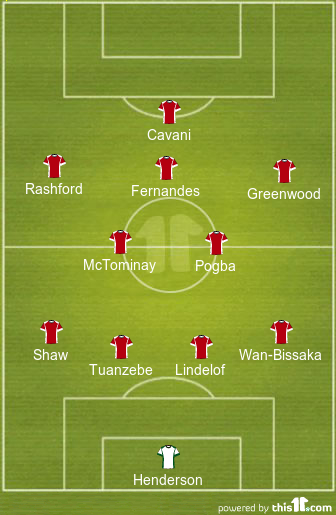