Goalkeeper: Bernd Leno is expected to keep his place in goal so Mat Ryan will have to settle for a place on the bench tomorrow night.

Defence: Arteta went with a back three against Chelsea last time out but the Arsenal boss is expected to revert to a back four against Crystal Palace so Kieran Tierney will drop to left-back.

Pablo Mari could be given the nod ahead of Gabriel while Rob Holding is likely to keep his place but David Luiz has been ruled out with a hamstring injury that’s hampered him recently.

Hector Bellerin has been declared available for selection despite picking up a knock against Chelsea but Calum Chambers could be recalled at right-back on Wednesday night.

Midfield: Granit Xhaka is back in training after recovering from a groin injury that’s kept him out of the last few games but the Swiss international is unlikely to be risked from the start.

Thomas Partey should start once again for Arsenal while Dani Ceballos is pushing for a recall. The 24-year-old was on the bench against Chelsea and could start alongside Partey tomorrow with Mo Elneny dropping out.

Martin Odegaard worked hard during Arsenal’s 1-0 win at Stamford Bridge last week so he could keep his place in the attacking midfield position.

Attack: Emile Smith Rowe was Arsenal’s match-winner against Chelsea and the youngster is expected to keep his place in the starting eleven while Bukayo Saka should once again start on the wing. That means Nicolas Pepe and Willian will have to settle for places on the bench.

Pierre-Emerick Aubameyang is expected to keep his place up front so Alexandre Lacazette will have to make-do with a substitutes role along with Eddie Nketiah and Gabriel Martinelli. 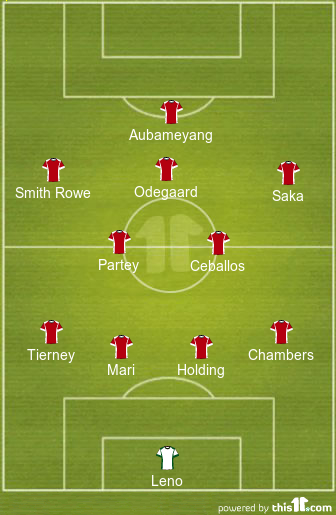