Liverpool will look to secure a top four place when they take on Crystal Palace at Anfield on Sunday. Here is the team we expect Jurgen Klopp to select

Liverpool will look to secure a top four place with a win when they take on Crystal Palace at Anfield on Sunday. Here is the team we expect Jurgen Klopp to select for the game:

Goalkeeper: Alisson Becker is certain to keep his place between the sticks tomorrow afternoon so Caoimhín Kelleher and Adrian will battle for places on the bench.

Defence: Liverpool will hand a late fitness test to Ozan Kabak as the defender is reportedly pushing to prove his fitness ahead of the crucial showdown with Crystal Palace. However, Kabak has been on the sidelines in recent weeks and won’t be 100% match fit so Klopp is still expected to stick with Rhys Williams alongside Nat Phillips in the middle of defence.

Trent Alexander-Arnold and Andrew Robertson will once again occupy the full-back positions but Liverpool will continue to be without the injured Virgil van Dijk, Joel Matip and Joe Gomez tomorrow.

Midfield: James Milner is pushing for a recall after making his comeback off the bench during the win at Burnley last week having recovered from injury. Alex Oxlade-Chamberlain will also be hoping to feature after scoring during his cameo appearance at Turf Moor.

However, Klopp is expected to stick with the same midfield trio that started against Burnley last time out so Gini Wijnaldum and Thiago Alcantara should line-up alongside Fabinho in the middle of the park.

Naby Keita is set to miss out once again through injury while Jordan Henderson is also still working his way back from a groin injury but Curtis Jones will be an option for Klopp from the bench.

Forward: Diogo Jota could make a surprise return to the Liverpool squad tomorrow, according to reports. The Portuguese international is looking to make his comeback from an ankle injury that’s kept him out recently but much like Kabak, Jota won’t be fully fit so may have to settle for a place on the bench even if he is given the green light to return to the squad.

Therefore, Roberto Firmino should keep his place up front after being among the goals against Burnley last time out. Mohamed Salah and Sadio Mane are also expected to start for the Reds against Crystal Palace. 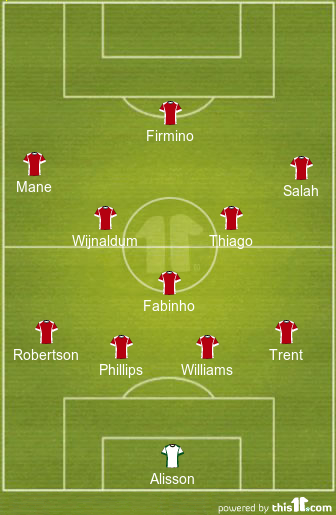