Arsenal take on Brighton at the Emirates on the final day of the season. Here is our preview with team news, line-ups and prediction for the game

Arsenal need to beat Brighton on Sunday to stand a chance of clinching a Europa Conference League qualification place.

The Gunners’ season looked all-but over just a few weeks ago but Wednesday night’s 3-1 victory at Crystal Palace made it four wins on the spin and that run has seen Arsenal close the gap on those above them in the table.

Mikel Arteta’s side head into the final game sitting ninth but are now just one point behind seventh-placed Tottenham – who’re above Everton on goal difference. Spurs face a tough trip to Leicester tomorrow while Everton travel to champions Man City so victory for Arsenal could see them leapfrog their rivals into seventh and with it secure qualification to the Europa Conference League.

It’s certainly not the competition Arsenal fans want to be in but they would still have European football to look forward to next season and maintain their record of playing in Europe in each of the last 25 campaigns.

Brighton head to the capital with very little left to play for as they have already secured their Premier League status for another season. The visitors currently sit 16th but could finish as high as 13th with a win if other results go in their favour.

Arsenal will be without Hector Bellerin as the full-back has been ruled out with a leg injury that he sustained against Chelsea earlier this month so he may have played his last game for the club amid rumours of a possible summer move.

David Luiz remains a doubt with an on-going thigh injury that’s kept him out of the past four games while second choice goalkeeper Mat Ryan is ineligible to face his parent club.

Gabriel Martinelli and Martin Odegaard are pushing for recalls after making impacts off the bench against Crystal Palace while Granit Xhaka should return to the starting eleven after recovering from a groin injury.

As for Brighton, Danny Welbeck misses the chance to face his former club as the striker is out with a hamstring injury that he picked up against Manchester City. 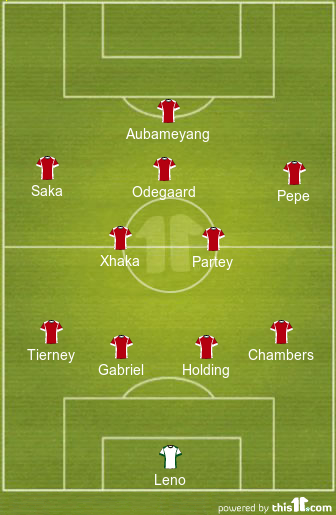 Arsenal 2-1 Brighton: Arsenal have a surprisingly poor record against Brighton as they’ve won just two of their last seven meetings and lost this fixture 2-1 last season.

However, the Gunners have won each of their last 11 home games on the final day of the season and come into this match in good form having won their last four league games.

Brighton can be a dangerous side on their day and will give Arsenal a good test tomorrow but we think the North Londoners will be too strong in the end.