Arsenal need to get their season up and running when they entertain Norwich on Saturday. Here is the team Gooner Mac thinks Mikel Arteta will select:

Arsenal will look to get their season up and running with a win when they entertain Norwich City at the Emirates Stadium on Saturday afternoon. Here is the team Gooner Mac thinks Mikel Arteta will select:

Goalkeeper: Bernd Leno conceded five times against Manchester City last time out and there have been suggestions Arteta may hand Aaron Ramsdale his league debut on Saturday. However, Leno is expected to retain the gloves with Ramsdale on the bench.

Defence: Arsenal have been handed a double boost in defence as Gabriel is back in contention after returning to full fitness so the Brazilian is in-line to make his first appearance of the season.

Ben White is also available again after being given the green light to return having tested positive for Covid last month. Our big-money summer signing should partner Gabriel in the middle of defence this weekend with Rob Holding and Sead Kolasinac making way.

Arsenal went with a back three/five at City last time out but Arteta is likely to revert to a flat back four against Norwich with Kieran Tierney keeping his place. Cedric Soares was hugely disappointing against City so I expect he’ll be dropped against Norwich.

Takehiro Tomiyasu is still waiting for his work permit to come through but even if it arrives before Saturday’s game, the Japan international has only had a few training sessions with his new team mates so I doubt he’ll start against Norwich. Therefore, Calum Chambers may keep his place.

Midfield: Granit Xhaka will start his three-match suspension after being sent off against Manchester City while Mohamed Elneny has been ruled out for at least two weeks with a thigh injury so Arsenal are short in the middle of the park.

There is some good news for the Gunners as Thomas Partey is back in contention after returning to full fitness so he’s expected to start his first match of the new season.

Albert Sambi Lokonga wasn’t risked for Belgium earlier this week as a precaution due to a minor knock but he’s expected to be available on Saturday. Therefore, the youngster could partner Partey in midfield.

Martin Odegaard was in terrific form for Norway during the international break so he’ll be hoping to carry that form into Premier League action with Arsenal this weekend. The former Real Madrid man should keep his place in the No.10 role.

Attack: Arsenal will assess the fitness of Emile Smith Rowe after he was sent home from England U21 duty due to illness. Arteta said at his press conference today that Smith Rowe needs to be assessed but is still feeling unwell so he’s unlikely to start on Saturday.

Nicolas Pepe missed the Man City defeat due to illness but he’s back to full fitness and should start if Smith Rowe is ruled out. Bukayo Saka will be in confident mood after scoring for England last week and he’s expected to start in the Arsenal attack against Norwich.

Pierre-Emerick Aubameyang should lead the line up front so Alexandre Lacazette, Gabriel Martinelli, Eddie Nketiah and Folarin Balogun will battle for places among the substitutes. 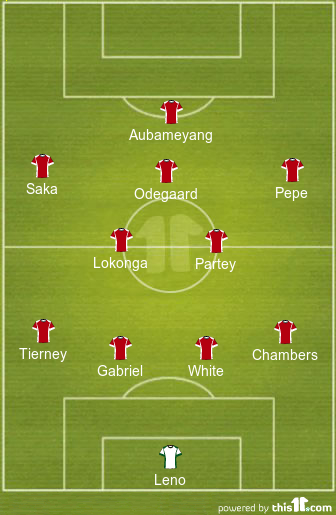