Manchester United take on Young Boys in Switzerland on Tuesday night. Here is the line-up we think Ole Gunnar Solskjaer will select for the game:

Manchester United begin their Champions League campaign when they take on Young Boys in Bern on Tuesday night. Here is the line-up we think Ole Gunnar Solskjaer will select for the game:

Goalkeeper: Dean Henderson hasn’t travelled to Switzerland as he continues to work his way back to full fitness so David De Gea is set to continue between the sticks with Tom Heaton his back-up on the bench.

Defence: Man Utd have no fresh injury concerns in defence and Solskjaer has options to rotate in the middle of the back four with Victor Lindelof and Eric Bailly pushing for recalls. However, the Norwegian coach is expected to stick with his first choice pairing meaning Raphael Varane will start alongside Harry Maguire tomorrow night.

Alex Telles remains out through injury so Luke Shaw should once again start at left-back while Aaron Wan-Bissaka is expected to start at right-back with Diogo Dalot having to settle for a place on the bench.

Midfield: Paul Pogba continued his excellent form with another top display during Manchester United’s 4-1 win over Newcastle United at the weekend but the Frenchman may be given a rest against Youth Boys.

Scott McTominay hasn’t made the trip to Bern as he’s still recovering from groin surgery and Nemanja Matic may be given a breather so Fred is likely to be recalled.

This game may be a good opportunity for Solskjaer to give Donny van de Beek some minutes after he hinted the Dutchman will get his chance to impress this season after a disappointing career at Old Trafford so far.

Attack: Cristiano Ronaldo made a dream return to Man Utd after scoring twice at the weekend and the Portuguese superstar is expected to keep his place up front with Edinson Cavani ruled out through injury. Anthony Martial is an option for Solskjaer if he wants to freshen things up in attack but I think we’ll see Ronaldo keeping his place.

Marcus Rashford is still recovering from shoulder surgery but Jesse Lingard is pushing for a start after scoring off the bench on Saturday afternoon and Solskjaer may be tempted to give him an opportunity to shine.

Jadon Sancho could keep his place on the wing so Mason Greenwood may be the man to drop out if Lingard does start. Bruno Fernandes rarely gets a rest so I expect he’ll continue in the attacking midfield position for Man Utd tomorrow. 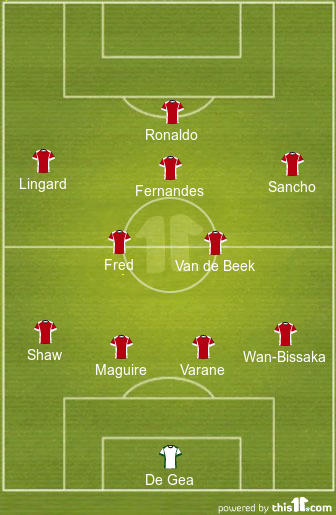