Manchester United take on Aston Villa at Old Trafford on Saturday lunchtime. Here is the line-up we think Ole Gunnar Solskjaer will select

Manchester United will look to get back to winning ways when they take on Aston Villa at Old Trafford on Saturday lunchtime. Here is the line-up we think Ole Gunnar Solskjaer will select for the game:

Goalkeeper: Dean Henderson made his first appearance of the season during the 1-0 defeat to West Ham in the Carabao Cup on Wednesday night but David De Gea is expected to be recalled this weekend after making a fine start to the season.

Defence: Man Utd are set to make wholesale changes in defence with several of their big hitters returning. Raphael Varane and Harry Maguire were given the night off against the Hammers but they should be recalled to start in the middle of the back four with Victor Lindelof and Eric Bailly dropping out.

Aaron Wan-Bissaka will also come back into the United side in place of Diogo Dalot while Luke Shaw will return at left-back after Alex Telles failed to take his opportunity to shine in the League Cup.

Midfield: We should see changes in the Manchester United midfield as well with Fred expected to be recalled after he was left out of the squad for the defeat to West Ham last night.

Scott McTominay was an unused substitute at Old Trafford so he should come in alongside Fred on Saturday afternoon with Nemanja Matic and Donny van de Beek making way.

Attack: United will recall their big guns in attack with Paul Pogba expected to start in a wide role while Cristiano Ronaldo should return to lead the line up front after the key duo were given a breather against West Ham.

Jadon Sancho may drop to the bench while Anthony Martial is almost certainly going to make way for Ronaldo after the Frenchman’s poor performance in the Carabao Cup last time out.

Bruno Fernandes will be recalled to start in the attacking midfield role for Manchester United while Mason Greenwood is likely to get the nod after being among the subs on Wednesday. Juan Mata and Jesse Lingard will be the players to drop out.

Marcus Rashford remains out with a shoulder injury while Edinson Cavani is facing a late fitness test as he continues to recover from a knock that’s kept him out recently. 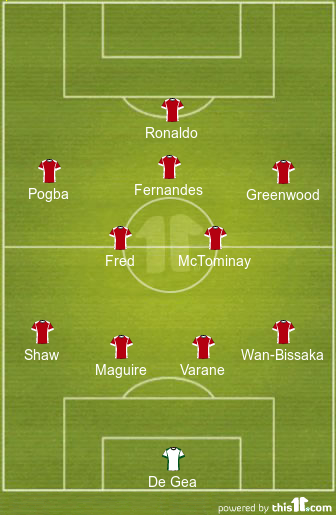