Man Utd will be aiming to return to winning ways when they host Atalanta in the midweek Champions League group stage clash. Here is our predicted line-up

Manchester United will be aiming to return to winning ways when they host Atalanta in the midweek Champions League group stage clash.

The Red Devils made a disappointing return after the international break with a 4-2 Premier League defeat against Leicester City on the road.

They have now gone winless for three league games. Across all competitions, they have picked up just one victory from the previous five matches.

Ole Gunnar Solskjaer has promised changes after the recent setback at the King Power Stadium, and here is now Man Utd could line up against Atalanta.

Goalkeeper: David de Gea has been in exceptional form for the Red Devils this term with multiple standout saves. The Spaniard made crucial stops against the Foxes at the weekend, but it was insufficient to deliver a positive result. He is widely expected to start in goal ahead of Dean Henderson.

Defence: Harry Maguire made a surprise return to the starting line-up against the Foxes, having spent just one day in first-team training following his three-week absence due to a calf problem. The move did not prove worthwhile as he looked short of pace, and was partly responsible for all four goals conceded.

The England international was rushed in after the injury suffered by Raphael Varane, but it proved a wrong decision. It won’t come as a surprise if Eric Bailly is called up to partner Victor Lindelof at the heart of the defence on Wednesday.

The rest of the backline should remain identical. Luke Shaw and Aaron Wan-Bissaka are undisputed starters when fit. The former was initially suspended for two European games for his red card at Young Boys, but Man Utd’s successful appeal saw the ban reduced to one.

Midfield: Solskjaer went with Nemanja Matic and Paul Pogba in midfield on Saturday. The duo were poor as a pair as they struggled to track the runs of Youri Tielemans, who was a regular attacking threat for the Foxes. The Belgian bagged a crucial equaliser at 1-1.

Scott McTominay and Fred have been the regular midfield partnership for Solskjaer, and they could return to the starting XI in midweek. Fred was unavailable on Saturday, having arrived late from World Cup qualifier duty for Brazil.

Paul Pogba excelled from a left-wing role for Man Utd this term, bagging seven assists. The Frenchman could play in the advanced attacking position against Atalanta, where he does not have to extensively worry about tracking back in defensive situations.

The rest of the line-up could remain unchanged with Bruno Fernandes and Mason Greenwood continuing in the number 10 and right-wing roles respectively while Cristiano Ronaldo could lead the line despite his poor showing at the King Power.

There is the temptation to play Marcus Rashford from the off, but he could be eased into the proceedings, having just recovered from a shoulder surgery. Solskjaer could yet make another controversial decision by starting Rashford ahead of Ronaldo. 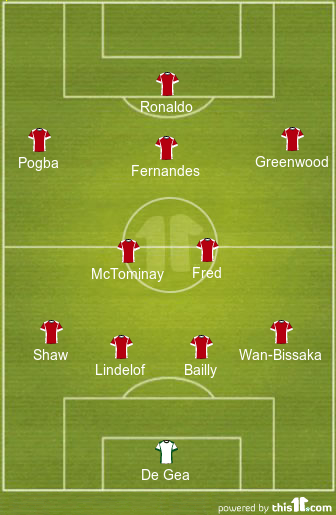