Manchester United will be aiming to return to winning ways in the Premier League when they face Tottenham Hotspur on the road on Saturday.

Manchester United will be aiming to return to winning ways in the Premier League when they face Tottenham Hotspur on the road on Saturday.

The Red Devils have been in a dreadful run of form in the league, and have failed to win their previous four games with three losses in the process.

Ole Gunnar Solskjaer’s managerial future is hanging in the balance. He may make a few changes after the 5-0 humiliation at the hands of Liverpool.

Here is how the Red Devils could line up on Saturday.

Goalkeeper: David de Gea has been one of the standout performers for the Red Devils this term. The Spaniard has made several quality saves during the season, but he was not helped by his defence lately. He is expected to start in goal ahead of Dean Henderson.

Defence: Raphael Varane has returned to training in the lead-up to the game. The France international appears in line to partner Harry Maguire in central defence with Victor Lindelof dropping to the bench. Aaron Wan-Bissaka and Luke Shaw are likely to continue in their full-back positions.

Midfield: Solskjaer has generally stuck with Scott McTominay and Fred as his midfield duo, but this has not helped United with limited progression up front. Donny van de Beek has been eagerly waiting on the bench, and it could be time for Solskjaer to play a more progressive midfielder. We fancy McTominay to swap places with the Dutchman.

Attack: Bruno Fernandes is an automatic starter for United from the number 10 position, but he could be asked to play in a deeper role when United are out of possession. Marcus Rashford has netted two goals in three games and he is likely to start in his preferred left-wing position.

Cristiano Ronaldo should lead the line despite his mixed fortunes in the league. He has not scored in four league games, but recently netted a late Champions League winner against Atalanta. Mason Greenwood has been the go-to choice on the right-wing, but he could drop to the bench with Jadon Sancho getting a rare outing from the position. 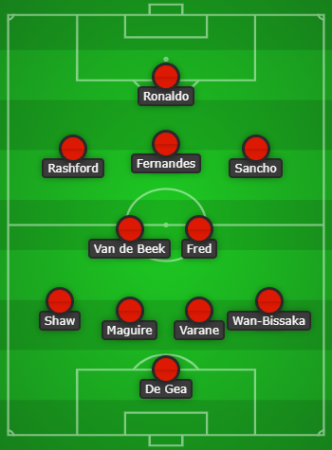