Manchester United are in Italy to take on Atalanta in the Champions League on Tuesday night. Here is the line-up we think Ole Gunnar Solskjaer will select

Manchester United are in Italy to take on Atalanta in the Champions League group stages on Tuesday night. Here is the line-up we think Ole Gunnar Solskjaer will select for the game:

Goalkeeper: David De Gea has firmly cemented himself as United’s No.1 this season so he’s expected to remain between the sticks with Dean Henderson on the bench.

Defence: Man Utd have been dealt a blow with the news that Victor Lindelof has been ruled out of the trip to Italy after the 27-year-old picked up a knock in training so Solskjaer will be forced into making at least one change in defence.

The Norwegian went with a back three at the weekend and it worked well during the impressive win at Tottenham so Solskjaer is tipped to stick with that system tomorrow night. If he does, Eric Bailly is likely to come in to join Raphael Varane and Harry Maguire in the Manchester United back line.

Midfield: Paul Pogba is back in contention as the Frenchman’s suspension only applies in domestic competition so he’s available in the Champions League.

Solskjaer has a big decision to make over Pogba’s recall but the likelihood is that Fred will be rested for the Manchester City game on Saturday so the former Juventus star could come in to partner Scott McTominay in the middle of the park.

Luke Shaw should once again start on the left flank with Alex Telles among the substitutes while Aaron Wan-Bissaka should keep his place on the right ahead of Diogo Dalot.

Attack: Bruno Fernandes is almost certain to keep his place in the attacking midfield role so Donny van de Beek will once again have to settle for a place among the Man Utd substitutes tomorrow evening.

Cristiano Ronaldo showed his class once again with a superb performance at Tottenham so the Portuguese superstar will start up front against Atalanta and he’ll be looking to continue his sensational record in the Champions League.

Edinson Cavani was excellent against Spurs but he may be given a rest tomorrow. Anthony Martial travelled to Italy after being left out at the weekend but a place on the bench is probably the best he can hope for.

Jadon Sancho and Mason Greenwood are pushing for recalls for Man Utd but Marcus Rashford is likely to be the man to come in for Cavani with the Englishman joining Ronaldo through the middle. 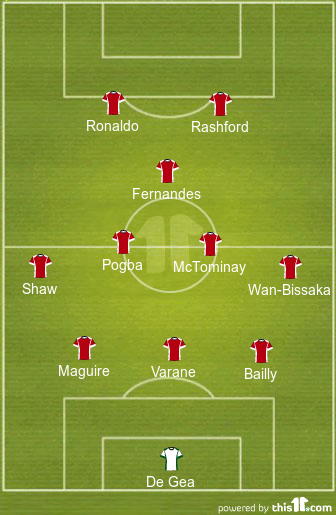