Goalkeeper: There will be no change in goal as Alisson Becker will continue between the sticks so Adrian and Caoimhín Kelleher will battle to be the Brazilian’s back-up among the substitutes.

Defence: However, Klopp is expected to mix things up in defence as Andrew Robertson is set for a recall at left-back. Kostas Tsimikas is set to drop out despite impressing during Liverpool win against Atletico Madrid in midweek.

Trent Alexander-Arnold should continue at right-back after another excellent display in the Champions League on Wednesday night. Ibrahima Konate is pushing for a recall so he could replace Joel Matip alongside Virgil van Dijk in the middle of Liverpool’s back four but Joe Gomez is ruled out with a hamstring injury.

Midfield: Klopp confirmed today that Curtis Jones will miss the trip to West Ham this weekend due to an eye injury that kept him out of the Atletico Madrid game while James Milner and Naby Keita are also still missing for the Reds.

However, Fabinho made a successful return to action in midweek so he’s expected to keep his place in the holding role. Thiago Alcantara also returned to the pitch with a substitutes appearance against Atletico having recovered from a calf injury and he could be handed a start on Sunday.

Alex Oxlade-Chamberlain did well in the Champions League last time out but he will be the man to make way if Thiago is recalled as Jordan Henderson should keep his place in Klopp’s starting eleven.

Forward: Liverpool have been dealt a big blow with the news that Roberto Firmino has been ruled out for around a month with a hamstring injury that he sustained against Atletico Madrid.

Diogo Jota is therefore set to keep his place up front on Sunday with Mohamed Salah and Sadio Mane offering support to the Portuguese international in Liverpool’s front three.

Takumi Minamino and Divock Origi will be attacking options from the bench for Klopp if he needs fresh legs against West Ham but Harvey Elliott remains out with a long-term injury. 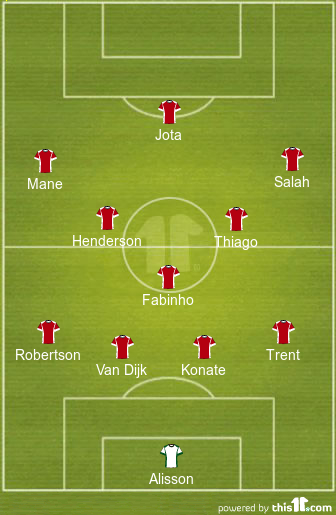