Liverpool will be looking to keep-up the pressure at the top of the table with a win over Aston Villa at Anfield on Saturday afternoon. Here is the side we expect Jurgen Klopp to select:

Goalkeeper: Alisson Becker will keep goal once again so Caoimhín Kelleher will need to settle for a place among the substitutes this weekend.

Defence: Klopp made plenty of changes for the win over AC Milan in the Champions League on Tuesday night so the big-guns are set to return in defence against Aston Villa.

Trent Alexander-Arnold and Andrew Robertson were unused substitutes at the San Siro so they’ll be fresh to return in the full-back positions for Liverpool tomorrow. Neco Williams and Kostas Tsimikas will drop out despite solid displays against Milan.

Virgil van Dijk is certain to be recalled after he was rested for the trip to Italy. Ibrahima Konate played well against Milan but the £36m summer signing is likely to drop back to the bench this weekend. Nat Phillips also impressed in midweek but he too is set to make way with Joel Matip coming in to partner van Dijk in the middle of Liverpool’s defence.

Midfield: There will be changes in midfield tomorrow as Fabinho is set for a recall after being a substitute on Tuesday. Youngster Tyler Morton continued to impress with another mature display but he’ll still drop out against Villa.

Jordan Henderson and Thiago Alcantara were given the night off against Milan so the duo are expected to start tomorrow meaning Takumi Minamino and Alex Oxlade-Chamberlain will miss out. Naby Keita made his comeback from injury with a second half appearance at the San Siro but he’ll have to settle for a place among the substitutes again.

Forward: Divock Origi was Liverpool’s hero again after netting the winner for the second game in a row but the Belgian forward is still expected to drop back to the bench this weekend.

Digo Jota should be recalled up front and he’ll be supported by Mohamed Salah and Sadio Mane – who were surprise starters against Milan. Roberto Firmino is still working his way back from a thigh injury so he’s out along with Harvey Elliott. 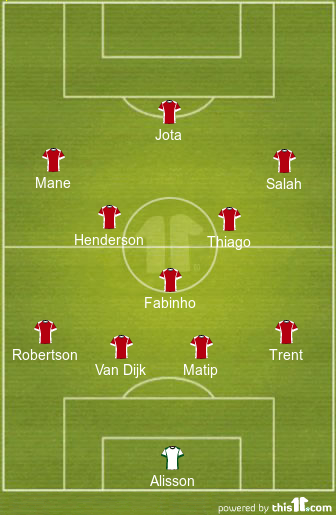