Arsenal take on Norwich City at Carrow Road on Boxing Day. Here is the side Mikel Arteta is expected to pick:

Goalkeeper: Arsenal will make wholesale changes from the side that beat Sunderland in the Carabao Cup in midweek with Aaron Ramsdale among the players recalled. Bernd Leno will drop to the bench.

Defence: Arteta will recall Gabriel after he was given a rest on Wednesday night while Ben White should start once again after playing against Sunderland. Rob Holding will therefore drop out despite a strong showing in the League Cup.

Takehiro Tomiyasu is expected to come back into the Arsenal defence with Cedric Soares making way. We should also see a change at left-back with Kieran Tierney replacing Nuno Tavares despite the youngster impressing last time out.

Midfield: There should be changes in the Arsenal midfield with Granit Xhaka recalled after he was a substitute in midweek. Mohamed Elneny will make way for the Swiss international.

Thomas Partey is still available ahead of the AFCON so he should start but it remains to be seen whether Albert Sambi Lokonga will return to the squad after missing the last few games due to covid.

Martin Odegaard continued his fine form with another impressive performance against Sunderland and he should keep his place in the attacking midfield position on Sunday afternoon.

Attack: Bukayo Saka is set for a recall on the right flank after he was rested on Wednesday night while Gabriel Martinelli should also come back into the Arsenal starting eleven after the 20-year-old was given a breather in the League Cup. Therefore, Emile Smith Rowe may have to settle for a place among the substitutes this weekend.

Eddie Nketiah stole the show against Sunderland after scoring a hat-trick but he’s still expected to drop to the bench against Norwich with Alexandre Lacazette recalled up front after he was given the night off on Wednesday.

Pierre-Emerick Aubameyang has been frozen out of the Arsenal squad for the last few games after being stripped of the captaincy and the Gabon international is expected to miss out once again for the trip to Carrow Road. 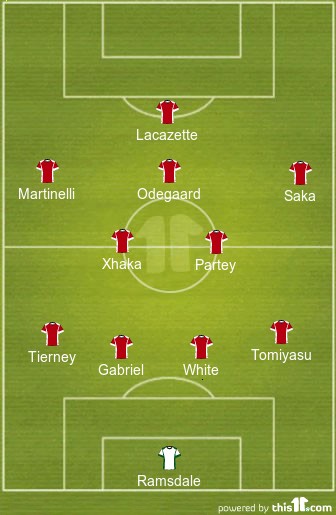