Manchester United take on Aston Villa at Villa Park in the Premier League on Saturday evening. Here is how Ralf Rangnick could line up for the game:

Goalkeeper: David de Gea is expected to keep his place in goal after keeping a clean sheet during the FA Cup win over Villa on Monday night. Dean Henderson will have to settle for a place on the bench once again.

Defence: Man Utd have been handed a major boost as Rangnick has confirmed Harry Maguire is expected to return after recovering from an abdominal injury that’s hampered him lately.

Maguire is likely to be given an immediate recall to start alongside Raphael Varane in the middle of defence so Victor Lindelof will be the man to make way. Phil Jones is also expected to be back in contention after a calf issue but a place on the bench is the best he can hope for.

Luke Shaw is suspended after collecting five yellow cards this season so Alex Telles should be recalled at left-back but Aaron Wan-Bissaka will continue at right-back for Manchester United tomorrow.

Midfield: Scott McTominay will miss the trip to Aston Villa this weekend due to suspension so there will be a change in midfield. Nemanja Matic is expected to be recalled to line-up alongside Fred.

Paul Pogba remains on the sidelines with a hamstring injury but Donny van de Beek will be an option for Rangnick from the bench.

Attack: Manchester United have received another big boost as Rangnick expects Cristiano Ronaldo to be back in contention after returning to training following a groin issue. Ronaldo should be recalled to start alongside Edinson Cavani up front tomorrow evening.

Bruno Fernandes is likely to keep his place in one of the attacking midfield positions while Mason Greenwood could start once again meaning Marcus Rashford is the man to drop out after a poor showing on Monday.

Jadon Sancho could return to the squad after a thigh injury kept him out of the FA Cup win but the youngster may have to settle for a place on the bench alongside Juan Mata and Jesse Lingard. 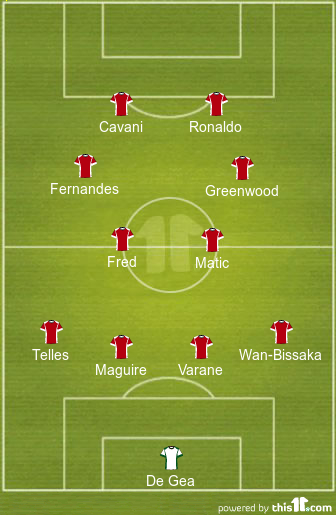