Manchester United will be aiming to return to winning ways when they entertain Tottenham at Old Trafford on Saturday. Here is our expected line-up

Manchester United will be aiming to return to winning ways when they entertain Tottenham Hotspur at Old Trafford on Saturday.

The Red Devils have been disappointing since the winter break, winning just two of their six league games. They suffered a heavy 4-1 Manchester derby defeat last weekend.

Interim boss Ralf Rangnick will be hoping for a strong response against Spurs. Man Utd have a good recent record in the fixture with four wins from the previous six meetings.

Here is how Man Utd could line up against Spurs:

Goalkeeper: David de Gea’s form has been outstanding throughout the campaign. The Spaniard made five key saves last weekend which saved Man Utd from further humiliation at the hands of Manchester City. He is expected to start in goal ahead of Dean Henderson.

Defence: Raphael Varane was absent for the Manchester derby after testing positive for coronavirus. However, the £58.5m star has now returned to full training, and could be drafted straight into the XI. Harry Maguire and Victor Lindelof had a difficult time at the Etihad Stadium, but the former’s decision-making in the box was particularly unimpressive. Varane could be reunited with Lindelof in central defence.

Aaron Wan-Bissaka has been known for his tough-tackling abilities, but he was pretty poor against the Cityzens with Jack Grealish constantly getting behind him. The right-back ended with no tackles to his name. He is likely to drop to the bench with Diogo Dalot getting the nod. Luke Shaw still appears absent after a bout of coronavirus. This could mean another start for Alex Telles at left-back, though he was not overly convincing.

Midfield: Scott McTominay had a poor outing against Pep Guardiola’s side. It could have been influenced by his recent return from an illness. We fancy Nemanja Matic to return to the Man Utd starting line-up alongside Fred. The Brazilian started off brilliantly in the derby, but also faded in the second half as the Cityzens completely dominated the proceedings.

Attack: Bruno Fernandes played in the false nine role last weekend, but we fancy him to return to his customary number 10 position. This could pave the way for Marcus Rashford to lead the line in a week where there has been plenty of speculation over his future at the club. Cristiano Ronaldo may be unavailable as he is training individually due to a hip flexor issue. Edinson Cavani has featured in recent sessions, but is not fully fit after a groin problem.

Paul Pogba, who was one of Manchester United’s better performing players in the derby, could slot on the left side of the attack. The Frenchman bagged his ninth assist of the campaign last weekend. Elsewhere, Jadon Sancho has been a bright spark since the winter break with three goals and two assists. He gave United hope with a stunning equaliser against City. To accommodate Pogba, Sancho could be swapped to the right wing. 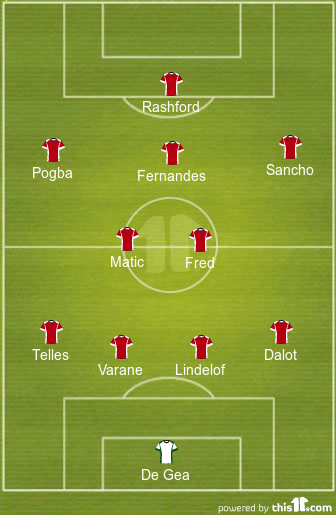