Liverpool take on Manchester City in the semi-final of the FA Cup at Wembley on Saturday afternoon. Here is the team we expect Jurgen Klopp to select:

Liverpool take on Manchester City in the semi-final of the FA Cup at Wembley on Saturday afternoon. Here is the team we expect Jurgen Klopp to select:

Goalkeeper: Alisson Becker is the undisputed No.1 and should once again start between the sticks for Liverpool this weekend.

Defence: Klopp is expected to make some changes in defence with key players returning to the starting eleven after being rested for Wednesday night’s 3-3 draw with Benfica.

Virgil van Dijk was among those given a breather for the Champions League quarter-final second leg so the Dutchman will return against City. Joel Matip is likely to keep his place so Ibrahima Konate could be the man to make way.

Trent Alexander-Arnold will be recalled at right-back after he was given the night off against Benfica. Joe Gomez will drop back to the bench. Andrew Robertson will also come back into the Liverpool side with Kostas Tsimikas missing out despite his solid performance in midweek.

Midfield: Fabinho should be another player to be recalled against Man City after he was rested on Wednesday. The Brazilian international is a vital player for Liverpool so Klopp will want him to help stifle the City midfield.

Thiago Alcantara is also set for a recall while Jordan Henderson should keep his place in the middle of the park. That means James Milner will drop out while Naby Keita could also make way after playing the full ninety minutes against Benfica.

Attack: Liverpool have been handed a double boost with Mohamed Salah and Diogo Jota expected to be fit this weekend. Jota picked up a knock in the first half against Benfica but Klopp says the Portuguese international has a good chance to face City.

Salah came off the bench to replace Jota on Wednesday night and picked up a knock, but has been declared available for selection and should return to start on the right flank for Liverpool.

Roberto Firmino was in terrific form in midweek having scored two goals but the Brazilian is expected to drop to the bench with Jota starting through the middle.

Luis Diaz may also have to settle for a place among the substitutes with Sadio Mane keeping his place in the front three along with Salah and Jota. 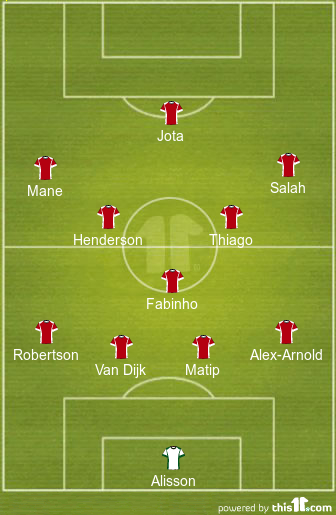