Chelsea will be aiming to return to winning ways when they entertain London rivals West Ham United at Stamford Bridge on Sunday. Here is our expected line-up

Chelsea will be aiming to return to winning ways when they entertain London rivals West Ham United at Stamford Bridge on Sunday.

The Blues were recently on a three-match winning run in all competitions before a surprise 4-2 Premier League defeat at the hands of Arsenal in midweek.

With the result, Chelsea have lost three straight league games at home for the first time since 1993. Manager Thomas Tuchel will want a strong response from his players against West Ham.

It may not be a straightforward game for the west London giants, considering the Hammers have beaten them in three of the previous five meetings, one of those was at Stamford Bridge in 2019.

Here is how Chelsea could line up against West Ham:

Goalkeeper: Edouard Mendy’s form has been inconsistent over the past few weeks. He could have prevented Eddie Nketiah’s opening goal in midweek if he had rushed to clear the ball early. Despite this, we fancy him to continue in goal over Kepa Arrizabalaga. The Senegal international will be eyeing his 13th clean sheet of the league campaign for Chelsea.

Defence: Andreas Christensen was substituted midway through Wednesday’s London derby, but Tuchel insisted that the decision was injury-related rather than for the Dane’s poor back pass which gifted Nketiah the opening goal. He has been deemed fit for the Hammers game.

Christensen should continue in the central defence for Chelsea. Alongside him, Thiago Silva will most certainly start after coming off the bench against Arsenal. After Malang Sarr’s poor showing, one of Cesar Azpilicueta or Trevoh Chalobah could feature on the left side of the back three. We fancy the former as Chalobah has been out of favour lately. Antonio Rudiger is out injured.

Reece James started the midweek derby on the right side of a three-man backline before playing in his customary right wing-back role where he should continue on Sunday. Marcos Alonso had a tough game at left wing-back, but it was partly contributed by Sarr’s poor performance. The Spaniard should keep his place.

Midfield: Ruben Loftus-Cheek was handed a start alongside N’Golo Kante in midweek after he bagged the opening goal for Chelsea in the FA Cup semi-final against Crystal Palace, coming off the bench. However, he could not gain any control in the centre of the park, and should make way for Jorginho. Mateo Kovacic remains on the sidelines with an ankle ligament injury.

Attack: Mason Mount was one of the top performers against Arsenal, bagging an assist. He has now registered seven goal contributions in his past four appearances alone. Timo Werner was also lively on Wednesday, bagging Chelsea’s equaliser (1-1) with a fortuitous deflection. The German should be fancied to keep his spot up front but with a different partner this time.

Romelu Lukaku was tipped to impress against Arsenal. However, the Belgian was barely in the game, barring one early shot across goal. He is definitely short of confidence. Kai Havertz has not scored in his last three Chelsea games, but has bagged six goals since the beginning of March. He is on course to start. 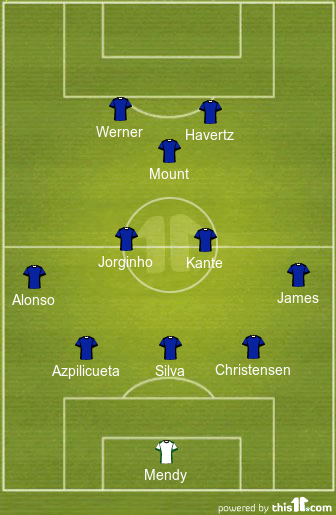