The Red Devils have suffered disappointing defeats to Liverpool and Arsenal in the last two games, and they are now facing the prospect of missing out on the top four.

Following the weekend loss to the Gunners, United are lying sixth in the league standings, six points adrift of the north London club, who also have a game in hand.

Their Champions League prospects are quickly fading away, and they must return to winning ways against Chelsea to keep up with Arsenal and Tottenham Hotspur.

Here is how United could line up against Chelsea:

Goalkeeper: David de Gea has been an undisputed starter for Manchester United in the Premier League. The Spaniard has come up with key saves this season, and was kept busy between the sticks against Arsenal. He made crucial stops to deny Bukayo Saka, Eddie Nketiah and Mohamed Elneny, but it was insufficient in the end. The Spaniard is expected to continue in goal.

Defence: Interim boss Ralf Rangnick may start with a three-man backline to match Chelsea’s formation. In that case, club captain Harry Maguire will most certainly partner Raphael Varane and Victor Lindelof. At right wing-back, Aaron Wan-Bissaka could get the nod with Diogo Dalot likely to play on the opposite end.

Alex Telles had a poor outing for Man Utd at left-back against Arsenal. The Brazilian made a poor clearance in the lead-up to the opening goal before fouling Bukayo Saka for a penalty. He could drop to the bench.

Midfield: Rangnick has limited options in the centre of the park as Paul Pogba and Fred are nursing injuries. This could mean that Scott McTominay and Nemanja Matic will continue in midfield. McTominay had a difficult outing at the Emirates Stadium where he committed several fouls while barely controlling possession. The United graduate needs a much better showing against Chelsea on Thursday.

Attack: From the weekend, Bruno Fernandes appears the most likely candidate to drop to the bench from the Man Utd attack. The 27-year-old had a poor all-round display. He missed an early scoring chance before squandering the crucial penalty to make it 2-2. It was followed up by a missed interception before Granit Xhaka’s long-range goal. He also made a poor tackle on Nuno Tavares and was lucky to avoid a sending off.

The rest of the attack could remain identical from the weekend. Jadon Sancho and Anthony Elanga should continue to get the nod over Marcus Rashford and Jesse Lingard. Cristiano Ronaldo netted his 100th Premier League goal in the 3-1 loss at Arsenal. The Portuguese is an undisputed starter up front, having already bagged 22 goals in his homecoming campaign. 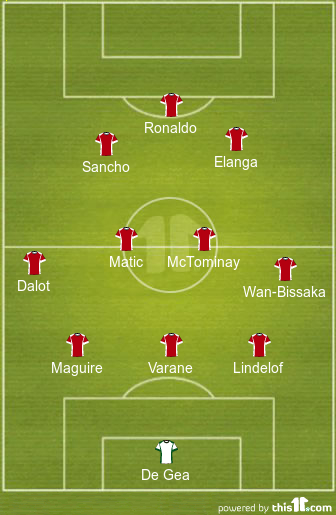