Manchester United are ready to try and hijack Liverpool’s attempts to sign Benfica hitman Darwin Nunez this summer, according to reports. 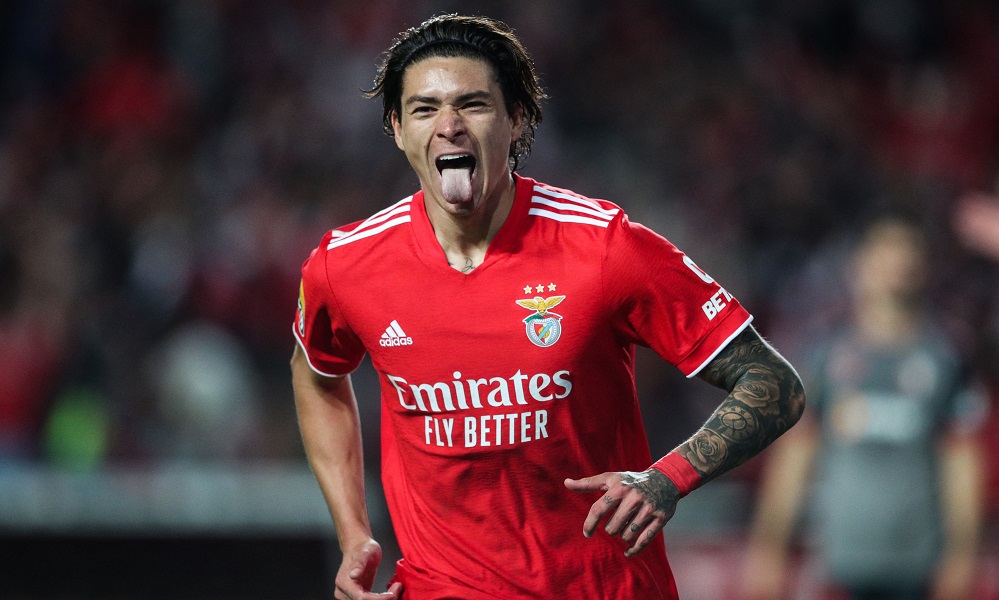 Manchester United are ready to try and hijack Liverpool’s attempts to sign Benfica hitman Darwin Nunez this summer, according to reports.

Nunez has developed into one of the most highly-rated strikers in European football since joining Benfica from Almeria in 2020. He firmly established that reputation after scoring 34 goals in 41 appearances last season.

The 22-year-old has attracted interest from some of Europe’s most powerful clubs in recent months but Liverpool appear to have moved into pole position to sign the South American.

According to Portuguese outlet Record, Liverpool are ‘determined’ to sign Nunez this summer and have offered Benfica a deal worth £85.5m [€100m]. The structure of the payments is yet to be agreed but it would represent a club record deal for Liverpool.

Jurgen Klopp is in the market for attacking reinforcements as Sadio Mane is widely tipped to join Bayern Munich this summer. Takumi Minamino and Divock Origi are also set to leave Anfield so Liverpool need to bring in another forward.

Nunez appears to be their first choice target and the Uruguayan international would provide support for the likes of Luis Diaz, Diogo Jota, Mohamed Salah and Roberto Firmino if he moved to Anfield.

Record’s report suggests that Nunez is keen on a switch to Liverpool as he wants to work under Klopp and is fascinated by the atmosphere at Anfield having played at the stadium last season.

However, the Merseysiders could yet face stiff competition for his signature as according to ESPN, Manchester United are prepared to go head-to-head with Liverpool and are ready to hijack their move for Nunez.

New United boss Erik ten Hag is expected to overhaul the squad he’s inherited from Ralf Rangnick this summer and a new young forward is high on his agenda ahead of the new season.

ESPN says Nunez is on their list of striker targets and Manchester United have not been put off by Liverpool’s interest, with the Red Devils prepared to battle it out with their north-west rivals this summer.

Nunez is keen to play in the Champions League but the report says United still feel they can convince the striker to move to Old Trafford despite only being able to offer him Europa League football next season.

According to ESPN, United have a sizeable transfer budget this summer and Liverpool are reluctant to get into a bidding war for Nunez, which could hand Man Utd an advantage if the Manchester giants are prepared to out-bid their rivals.

We’ll have to wait and see how things develop over the coming weeks but it looks as though Man Utd and Liverpool are hoping to lure Nunez to England and he’d be a superb signing for either club if they could get a deal agreed.