Raphinha set to hold out Arsenal approach for Barcelona 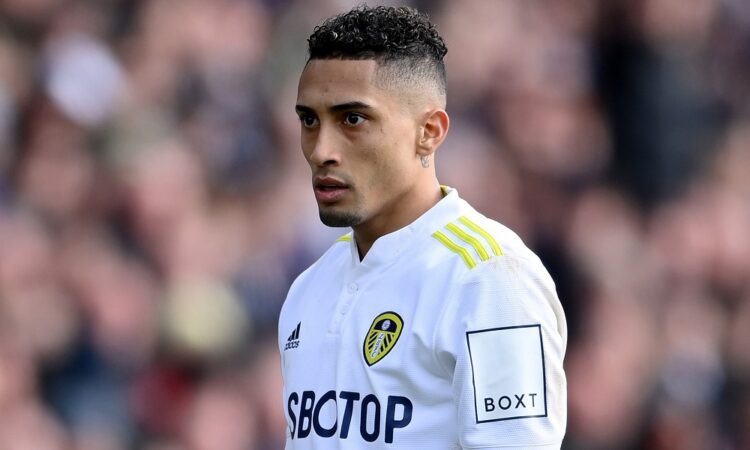 Arsenal face a battle to sign Leeds United star Raphinha as the Brazilian winger has his heart set on a move to Barcelona, as per Mirror.

The Gunners have been strongly linked with Raphinha in recent weeks with The Times reporting that the north Londoners are ready to submit a formal offer.

However, the Mirror claims that Raphinha is in no rush to decide his future as he’s holding out for a move to Barcelona. Chelsea, Arsenal, and Tottenham are the English teams looking to sign the South American this summer. Consequently, Leeds United have slapped a £60m price tag on the 25-year-old.

The Gunners have been in direct contact with the Yorkshire-based outfit after Mikel Arteta made Raphinha a prime target and they hoped to lure the Brazilian to the Emirates Stadium.

The report says Raphinha has already agreed personal terms with Barca but the Catalan giants have cooled their interest in recent weeks as they are unable to meet Leeds’ asking price.

Arsenal are in a better position than the Blaugrana when it comes to reaching a potential agreement with Leeds United, but the player wants to wait and not rush to a decision in the hope Barca rekindle their pursuit.

Mikel Arteta is looking for more goal threats this season. The former Manchester City assistant boss has already parted ways with Alexandre Lacazzette and Pierre-Emerick Aubameyang. The former has signed with Olympique Lyon while the latter left for Barcelona.

Raphinha can certainly add another goal threat as he scored 11 goals last term. This takes his tally to 17 goals in the last two seasons in England, which is an impressive return considering he’s played in a struggling Leeds team.

He likes to cut in from the right wing and can play more centrally as well, so he’d give Arteta options in the final third if Arsenal are able to lure him to the Emirates.

While reaching an agreement with Leeds is unlikely to be a problem, Arteta must convince the player to join his project. That said, Chelsea and Tottenham are in a much better position to do so, given their UEFA Champions League status for next season.

Only time will tell if Barca’s improved financial situation prompts them to move for Raphinha. However, if they reach an agreement with Leeds, they can be assured Raphinha will say yes, which would be bad news for the likes of Arsenal, Chelsea and Spurs.