“Unbelievable”, “magnificent”, “an amazing footballer”; all words to describe just one diminutive Croatian midfielder who has been quietly weaving his magic at White Hart Lane, a hugely underrated talent of stunning quality and precision in both pa… 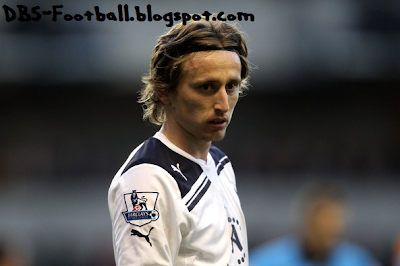 “Unbelievable”, “magnificent”, “an amazing footballer”; all words to describe just one diminutive Croatian midfielder who has been quietly weaving his magic at White Hart Lane, a hugely underrated talent of stunning quality and precision in both passing and creativity.

Now, he is wanted, perhaps even needed, by two of the biggest clubs in England and although his price at first glance may be considered astronomical, at £35 million, Luka Modric could become the ideal replacement for a retiring footballer, considered by Manchester United as simply priceless in Paul Scholes.

Manchester United’s search for a replacement for the midfield maestro is ongoing, with various possibilities offered in generous portions by the worlds media through speculation and transfer gossip. Luka Modric is one of United’s prime targets, and it is clear to see why.

The 25 year-old is a player who, in the centre of the field can do close to anything he wants. His passing is precise and his vision is superb, while he remains tenacious in the tackle and determined on a run. He is supremely intelligent, with an attacking mind similar to that of Scholes himself, as he can spot a team mates run or movement almost telepathically. Indeed, this man is a special talent and one that could unlock the future for Manchester United, both in the Premier League and in Europe, as he pulls the strings in a midfield in dire need of a player with the perfect balance of creativity.

Modric would have huge boots to fill at Manchester United, with Paul Scholes’s talents quite stunning, as can be seen from the chalkboard below. Scholes rarely misplaced a pass, and often orchestrated how the game was played. 97 passes, and only ten didn’t reach their intended target; it’s a marvellous record.

As Michael Carrick and Darren Fletcher are more than capable of filling that more defensive role in midfield, one in which the dirty work is done and the ball is won, Luka Modric can do what he has been doing since his career began. He can push forward freely, spreading the play from the left and the right, as well as forcing balls down the middle into the danger area of in and around the penalty box. With his steely composure on the ball, Modric has the ability to control the play on his terms, and command the attacking play, while getting back in his own half to defend when needed. 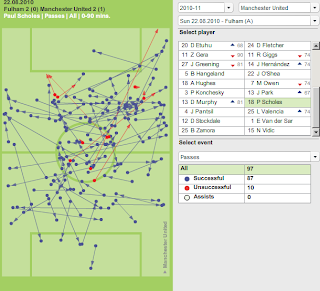 Paul Scholes’s passing was immense throughout his career.  Havin attempted 97 passes, with 87 successful, he was a master at passing, all over the pitch at various different ranges. Keeping the ball was his speciality, and it will take someone special, someone similar at least, to replace him – Luka Modric perhaps? 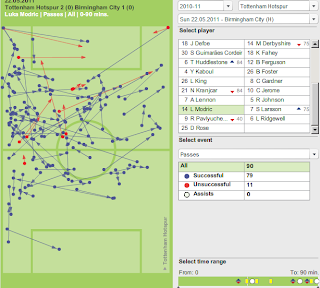 Luka Modric is not so bad at passing himself. A central midfielder, a play maker, Modric’s versatility allows him to drift from one side to another, with this chalkboard showing him predominantly on the left hand side, working to create chanced for his team mates. 90 attempted passes, with only 11 unsuccessful is outstanding, like Scholes.

He is a skilful and very technical player, and while he isn’t always the one who scores the goals, nor the one who always assists them, he most certainly creates the chance and enables the attack to happen in the first place. His intuitive passing often sets up, creates and commands the attack; an ability rare in midfield players today.

With a player like Modric in Manchester United’s midfield, everything would become so much more seamless, with Rooney being helped out in the creative side of play, enabling United to utilise the Englishman far more on the attacking capabilities, saving his energy and helping him to score more goals with Hernandez. Modric’s versatility of playing deep and further forward would be a breath of fresh air in the middle, and with his aforementioned ability could work alongside his midfield pair in balancing out the United team perfectly.

£35 million and £40 million seems a lot of money for one player, but with few alternatives, and having been proven in the Premier League, Luka Modric would be a fantastic addition to any squad, especially Manchester United’s. But will Tottenham let their prized possession go?