Liverpool take on Atletico Madrid in the last-16 of the Champions League on Wednesday night. Here is the team we expect Jurgen Klopp to select

Liverpool will be looking to turn the tie around when they take on Atletico Madrid in the last-16 of the Champions League on Wednesday night. Here is the team we expect Jurgen Klopp to select for the game:

Goalkeeper: Alisson Becker remains on the sidelines after being ruled out with an on-going hip injury so Adrian will deputise between the sticks tomorrow night.

Defence: Liverpool have been handed a major boost as Andy Robertson is fit to return after missing the win over Bournemouth at the weekend due to a minor hamstring issue. The Scottish international should replace James Milner at left-back while Trent Alexander-Arnold will obviously keep his place at right-back.

Joel Matip and Dejan Lovren are options for Klopp if the Reds boss wants to freshen things up in defence but I think we’ll see Joe Gomez keep his place alongside Virgil van Dijk in the middle of the back four against Atletico.

Midfield: Liverpool were handed a double boost today after Klopp confirmed at his press conference that Jordan Henderson is ready to return after missing the last four matches with a thigh injury.

The skipper is expected to be recalled alongside Gini Wijnaldum in midfield with Fabinho keeping his place in the holding role meaning Alex Oxlade-Chamberlain is likely to be the man to make way for Henderson’s return.

Naby Keita is another midfield option for Klopp but I think the Guinea international will have to settle for a place on the bench along with Adam Lallana.

Attack: Liverpool need goals tomorrow night after losing the first leg 1-0 in Spain so Klopp will no doubt go with his big guns in attack. Therefore, I fully expect to see Mohamed Salah keeping his place on the right wing.

Sadio Mane should also start once again with the Senegal international and Salah supporting Roberto Firmino in the front three.

That means Divock Origi and Takumi Minamino will have to make-do with places among the substitutes but they’ll be good options for Klopp to have off the bench if needed. Xherdan Shaqiri remains out with a calf injury. 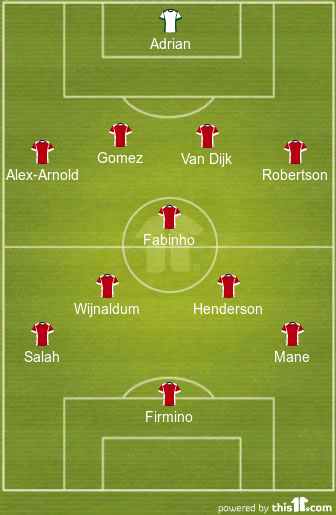