Man Utd take on Real Sociedad in the first leg of their Europa League tie on Thursday. Here is the line-up we think Ole Gunnar Solskjaer will select

Manchester United take on Real Sociedad in the first leg of their Europa League tie in Italy on Thursday night. Here is the line-up we think Ole Gunnar Solskjaer will select for the game:

Goalkeeper: Dean Henderson will be hoping for a recall after impressing in the FA Cup win over West Ham last week but Solskjaer is still expected to stick with David De Gea as his number one goalkeeper in the main competitions.

Defence: Man Utd could look to freshen things up in defence and Victor Lindelof may be given a rest after receiving criticism following the 1-1 draw with West Brom at the weekend. Eric Bailly is fit and available for selection so he could come in to partner Harry Maguire tomorrow night.

Aaron Wan-Bissaka should continue at right-back but Solskjaer could make a change at left-back with Luke Shaw rested and Alex Telles given another chance to impress after a slow start to life in England.

Midfield: Manchester United will still be without Paul Pogba against Real Sociedad as the midfielder has been ruled out for at least another 2-3 weeks with a thigh injury that’s hampered him recently.

Scott McTominay is also a doubt with a knock but he’s made the trip to Turin and the issue is believed to be minor so the Scottish international should continue alongside Fred in the middle of the park. Therefore, Nemanja Matic will remain on the bench.

Donny van de Beek has been ruled out with a muscle injury so he won’t be involved tomorrow. However, Bruno Fernandes is fit to keep his place in the attacking midfield position and he’ll be a key player for Man Utd on Thursday.

Attack: Edinson Cavani has been forced to remain in Manchester after suffering a muscle problem at the weekend so Solskjaer will have to make a change up front. Anthony Martial faces a late fitness test due to a knock but he should be fine to start through the middle.

Marcus Rashford should keep his place in the Man Utd attack while Mason Greenwood could be in-line for a recall with the likes of Daniel James and Amad Diallo among the substitutes. 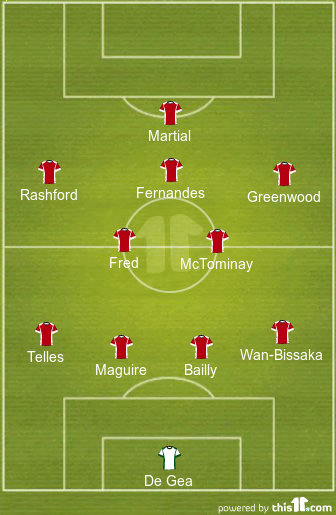