Manchester United take on AC Milan in the Europa League on Thursday evening. Here is the line-up we think Ole Gunnar Solskjaer will select

Manchester United take on AC Milan in the Europa League on Thursday evening. Here is the line-up we think Ole Gunnar Solskjaer will select for the game:

Goalkeeper: David De Gea has travelled to Milan and is back in contention after being released from quarantine having been in Spain following the birth of his first child. However, Dean Henderson is being tipped to retain his place so De Gea may have to settle for a place on the bench.

Defence: Eric Bailly has been ruled out of the game after picking up a knock in training so Victor Lindelof is set to start alongside Harry Maguire in the middle of the Man Utd defence tomorrow.

Aaron Wan-Bissaka will once again start at right-back but we could see a change on the opposite side of defence with Alex Telles coming in for Luke Shaw. Shaw has been in excellent form lately but Telles has been a regular in the Europa League so he might be recalled in Milan with Shaw given a rest.

Midfield: Manchester United welcome Paul Pogba back into the squad as the midfielder has travelled to Italy after overcoming a thigh injury that’s kept him out for the past 10 games. As long as he’s deemed fully fit, Pogba could be recalled to start in midfield and his return will be a big boost.

Fred is expected to keep his place so Scott McTominay could be the man to make way if Pogba is recalled while Bruno Fernandes will once again line-up in the attacking midfield position. Donny van de Beek is back after injury but he’ll have to settle for a place on the bench.

Attack: United have been handed a blow ahead of the game as Edinson Cavani was initially named in the travelling squad after recovering from injury but was forced to pull out at the last minute after suffering a reaction to training this morning.

Marcus Rashford should keep his place in the Man Utd attack after making a successful return to action at the weekend while Mason Greenwood and Daniel James are expected to start with Anthony Martial still ruled out. Amad Diallo will be an option from the bench. 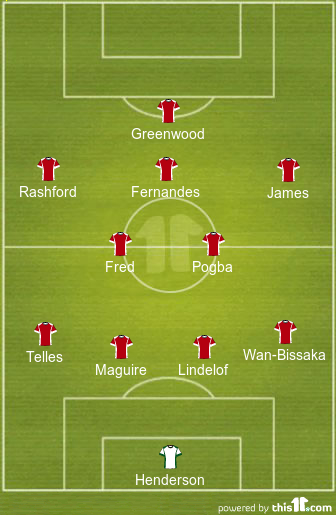